With several Covid-19 restrictions in place, the country saw some major events cutting across 2021 to leave a mark in time. 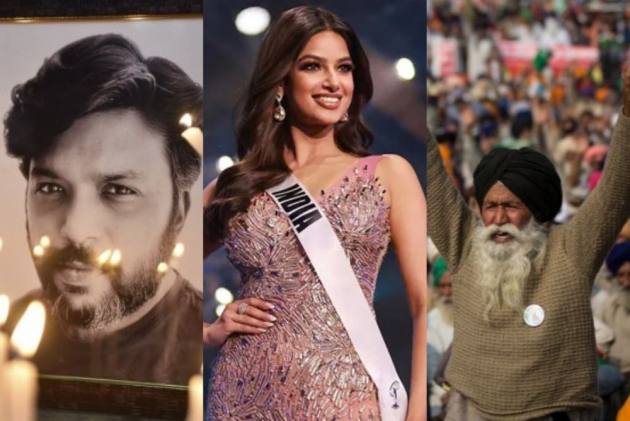 Rocked by the harrowing second wave, India throughout 2021 saw a sweeping lockdown with Covid-19 restrictions being imposed every now and then in states and cities. However, with several restrictions in place, the country saw some major events cutting across 2021 to leave a mark in time.

As the year draws to an end, here’s a recap of the prominent highlights of 2021.

From December 2020, Indian farmers launched protests against Prime Minister Narendra Modi-ruled government over three contentious farm bills, that aimed at bringing amendments to the agricultural sector. The protest that went through the entire 2021, before it was called off in December, was sustained by numerous camps, tractors and farmers assembled at the Singhu and Tikri borders in North India. Through the cold and harsh winter, extremely hot summers, when the entire world was cooped inside their homes or hospitals, battling the second wave, the farmers stood firm on their demands to be met. After a year of killings, rallies, media hullabaloo, the Modi government finally gave in to their demands and agreed to repeal the farm laws in November. The protest was finally called off in December.

Yearender 2021 | 5 Landmark Protests That Rocked The World This Year

Aryan Khan, the son of Bollywood superstar Shah Rukh Khan was mired in controversy and continued to dominate the news in the later half of 2021 after he was accused of doing drugs along with his friends inside the Cordelia Cruise. Following the incident, Aryan was arrested on October 3 by the Narcotics Control Bureau (NCB) and was lodged in Mumbai’s Arthur Road Jail for 22 days. Aryan Khan along with many others was accused of consumption and ‘conspiracy’ and was booked under other charges. After making several rounds to the court followed by days of legal arguments centred around the consumption of drugs, on October 28, the Bombay High Court granted Aryan Khan bail. Aryan Khan’s incident had once more opened the floodgates around Bollywood’s drug racket, which had also dominated the news last year following the death of actor Sushant Singh Rajput.

An Indian Air Force (IAF) helicopter with Chief of Defence Staff Gen Bipin Rawat on board crashed in the first week of December near Coonoor in Tamil Nadu, the IAF said, as four people were killed in the mishap that happened reportedly due to low visibility owing to foggy conditions. Later it was confirmed that General Bipin Rawat along with his wife, Madhulika Rawat had succumbed to their injuries following the Mi-17VH chopper crash. The accident site was a scene of despair with trees being reduced to broken pieces under the impact of the crash, flames from the chopper engulfing the wooden logs resulting in billowing smoke and personnel scurrying to douse the fire, including using buckets and water hoses. What seemed to be some charred bodies were also seen lying around.

Indian activists were devastated by the death of activist Stan Swammy, who was accused in the Elgaar Parishad case, on July 5. Swammy, who suffered from Parkinson disease, died of cardiac arrest. Swammy’s death triggered a row over his imprisonment when he was suffering from Covid. He was also repeatedly denied bail in the case, with the government stating that Swamy's arrest followed "due process under law". According to reports, the Jesuit priest was the oldest to be accused under the Unlawful Activities (Prevention) Act, (UAPA) Act. After contracting Covid-19 in the jail, Swammy was moved to a private hospital in May, where he breathed his last. According to reports, Swammy’s health had worsened considerably since he lodged in the Taloja jail since October 2020.

Yearender 2021 | 10 Comments By Judges That Surprised Us This Year

Delhi-based photojournalist Danish Siddiqui, who worked with Reuters, lost his life during an assignment in Afghanistan following the Taliban seizure of power. The Pulitzer Prize-winning photojournalist was not simply killed in a crossfire in Afghanistan, nor was he simply collateral damage, but was "brutally murdered" by the Taliban after verifying his identity. The award-winning journalist was killed while covering clashes between Afghan troops and the Taliban in the Spin Boldak district of Kandahar city. Later, he was posthumously awarded as the 'Journalist of the Year' for 2020 by the Mumbai Press Club.

Year-Ender 2021: Indian Actors Who Made Us Proud In Hollywood

Kashmir’s top separatist leader, who spearheaded the Kashmiri movement against the Indian rule, Syed Ali Geelani, died at the age of 92 on September 1. A veteran campaigner against the Indian government, Geelani was placed under house arrest for 11 years. Geelani was a controversial figure, who was an advocate of Kashmir’s freedom, but experts believed that he favoured the region’s merger with Pakistan. Geelani led a faction of the All Parties Hurriyat Conference, an umbrella group of almost two dozen separatist parties - but walked out in 2020, accusing others of "revolting against his leadership".

The end of the year saw the Miss Universe crown being brought back to India after 21 years by Indian actor-model Harnaaz Sandhu, in a historic achievement. The 21-year-old Sandhu became the third Indian to win the celebrated title and beat contestants from 79 countries to become the reigning beauty queen of the universe. Prior to Sandhu, only two other Indians -- Sushmita Sen in 1994 and Lara Dutta in 2000 -- had bagged the title. The Chandigarh-based model, pursuing her master's degree in public administration. is the daughter of Pritam Singh Sandhu and Dr Ravinder Kaur Sandhu. Sandhu also shares a strong passion for climate change advocacy. Sandhu views beauty pageants as a way for women to come forward and forge sisterhoods. (With PTI inputs)