The party said the BJP backed Governor's decision to permit Yeddyurappa to take oath without raising any doubt was anti-democratic. 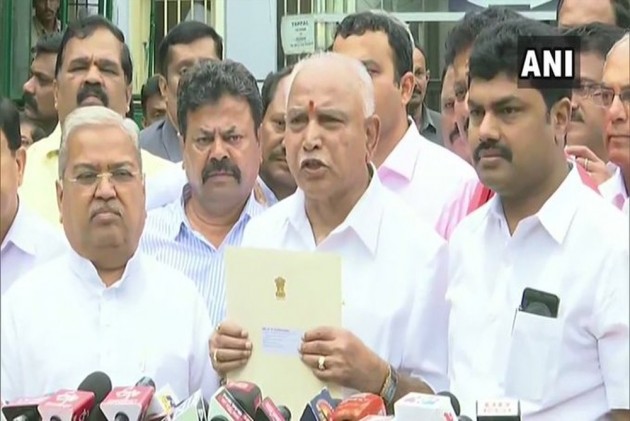 The Congress and JD(S) on Friday severely criticised the Bharatiya Janata Party and the 'BJP backed Governor' for allowing B S Yeddyurappa to form the government in Karnataka through "unconstitutional means", charging that parliamentary democracy was being "butchered" in the state.

Parliamentary democracy is being butchered in Karnataka.

How can @BSYBJP stake claim to form govt when they dont have the numbers.

How can the Governor who is the safe keeper of the constitution give his consent ? Where is the Rule of LAW ! @narendramodi @AmitShah ! pic.twitter.com/9b9LDkPGGX

As Yeddyurappa staked the claim in a surprise move and said he had been invited to form the government, the Congress, said, "corruption icon and former jail bird" Yeddyurappa had used his "excellent horse trading skills" to subvert democracy and come to power.

JD(S), which was the Congress' ruling coalition partner, said the Governor's decision to permit Yeddyurappa to take oath without raising any doubt was "anti-democratic."

People of Karnataka remember his disastrous tenure as CM between 2008-2011, which ended with BSY in Jail.

Former chief minister and Congress Legislature Party leader Siddaramaiah said Karnataka has become "an experimental lab of the BJP." He said the BJP has a strength of 105 which is way less than the halfway mark.

"In no way BJP can form the government if the constitution is followed," he said adding, this only proved that BJP has no belief in the democratic values.

Echoing similar sentiments, JD(S) tweeted, "The strength of the house is 222 (after disqualification of three  MLAs) and the half-way mark is 112. However, BS Yeddyurappa approached the governor saying that he has 105 MLAs with him.

The party said the Governor's decision to permit Yeddyurappa to take oath without raising any doubt was anti-democratic.