Yet Another Record At Rohtang Tunnel, 6,400 Tourist Vehicles Pass Through On A Single Day

The tunnel, which provides all-weather connectivity between Manali and Keylong, and also connects Leh, was inaugurated in October 2020. 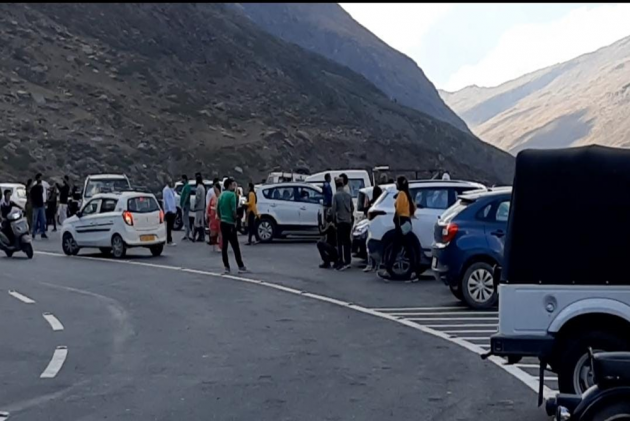 A record number of 6,400 vehicles crossed the Atal Tunnel, an all-weather road beneath the 13,058-ft-high Rohtang Pass in Himachal Pradesh, on Sunday. Amid the second Covid wave, the state government had put a ban on any tourist activities in Himachal Pradesh, however, days after restrictions were lifted, the tourist’s footfall increased drastically.

“This was the highest single day and highest till date arrivals,” said Manav Verma Superintendent of Police Lahaul-Spiti recalling the earlier highest number of vehicles crossing the tunnel being 5,674 on March 28, 2021--- before the second wave of coronavirus.

The tunnel, which provides all-weather connectivity between Manali and Keylong, and also connects Leh, was inaugurated in October 2020. It has become the biggest tourist attraction in Manali.

Good News For Travellers: In Next Two Years, You’ll Be Able To Travel From Delhi-Kullu In Just 7 Hours

The hotel occupancy in Shimla, Kullu-Manali, Dharamshala, McLeodganj, and Kasauli has almost touched 100 per cent.

Sanjay Sood, President Shimla Hotels and Restaurants Association said, “The weekend has done very well, almost a full house. This is due to the lifting of the Covid restrictions like the RTPCR test and also entry passes. Now the tourists are free to enter Himachal Pradesh without any checking. Most of them coming to the hotels are also vaccinated. Thus, there is no problem for the hotel staff to serve them.”

However, he points out that the tourists are somehow preferring to stays away from the urban towns of Shimla, Dharamshala, and Dalhousie fearing Covid infection. Around 35 to 40 per cent are getting lodged at homestays.

Many families have converted their cottages in the orchards as homestays, where the tourists are staying for almost weeks to months.

The weekend footfall in the town is mainly from Punjab, Haryana, UP, Uttarakhand, and Chandigarh while others from Delhi, Noida, Mumbai, Gujarat, and Bengaluru are turning to the villages, apple orchards, and rural settings in Kangra, Chamba, Kullu, Solan, Sirmaur, and Shimla.

Shimla and its peripheral tourist destinations of Kufri, Mashobra, Naldehra had witnessed massive traffic jams on Sunday and most parking lots in Shimla were packed.

“It took almost two hours to cross the Dhalli -Kufri stretch on Sunday on the way to my orchard at Kotkhai,” says a tourist Anjur Chauhan.