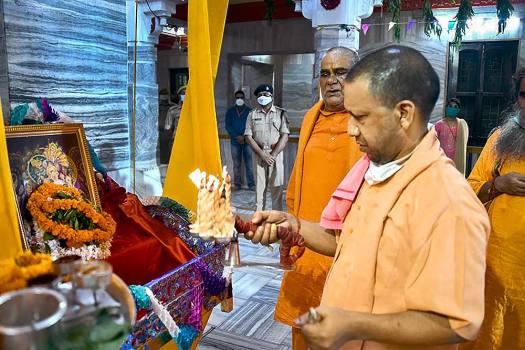 Uttar Pradesh Chief Minister Yogi Adityanath has asked officials to formulate a strategy and bring an ordinance if required to prevent "religious conversions in the name of love", an official said on Friday.

“It has been seen in the recent past that women have been made to convert in the name of love and marriage and later subjected to cruelty and even murder," the official who did not wished to be named said.

"It has often been seen that this is being done in an organised manner," he claimed. "If required, an ordinance can be brought for it,” he added.

The aim is to ensure that such crimes are checked and effective action is taken against the culprits. All this is being taken into consideration, he added.

In Kanpur, the police had recently set up a Special Investigation Team to look into reports of such religious conversions.

"The report was submitted along with a draft legislation, Uttar Pradesh Freedom of Religion Bill, 2019," law commission secretary Sapna Tripathi had said.

The report was prepared after going through pre and post-independence laws in the country and neighbouring countries like Nepal, Myanmar, Bhutan, Sri Lanka and Pakistan besides keeping in mind court judgments.

"The commission is of the view that existing legal provisions are not enough to check religious conversions and on this serious matter, a new law is needed like in some other states," the report said.

The 268-page report included newspaper clippings regarding forcible conversions, international covenants on the right to religion, anti-conversion laws in neighbouring countries and India.