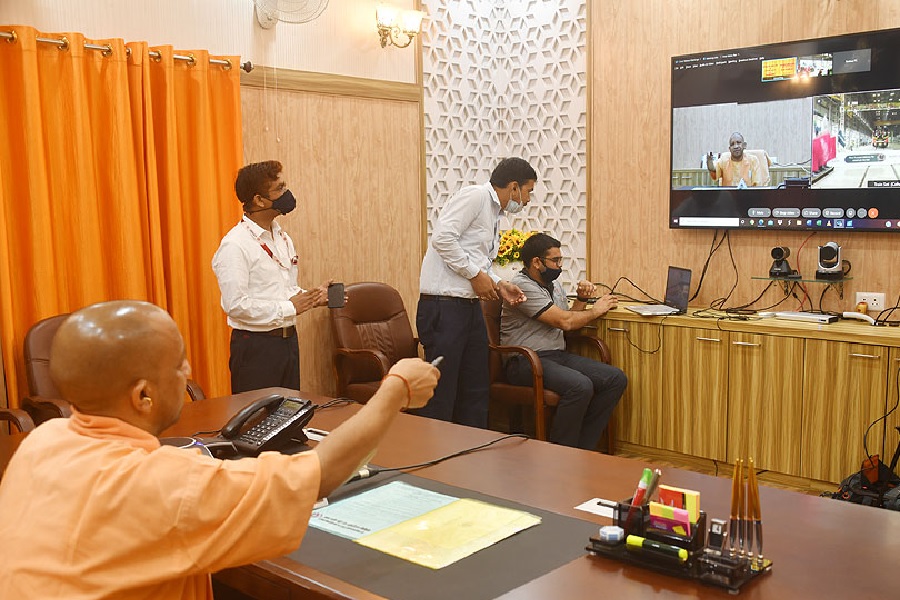 After Noida and Lucknow, metro train has now arrived in the industrial city of Kanpur and Agra, which is famous for international tourism. Uttar Pradesh Chief Minister Yogi Adityanath on Saturday unveiled the first prototype train of Kanpur and Agra Metro from Gorakhpur via video conferencing.

“Today is a moment of joy for us. Under Prime Minister Modi's 'Make in India' and 'Self-reliant India' campaign, this metro train has been completely manufactured in the country,” he said during the inauguration, adding that safe and comfortable public transport like metro is the need of the hour.

The Chief Minister also said that even during the pandemic period, the Uttar Pradesh Metro Rail Corporation continued to work. The first prototype train has been made available ahead of time despite the adverse conditions of the Covid-19.

“With this, we will be in a position to dedicate Kanpur and Agra Metro to the nation around November 30. Efforts will be made to get it started at the hands of Prime Minister Narendra Modi. Uttar Pradesh is the most populous state of the country. Metro Rail is being successfully operated in four cities of the state namely Lucknow, Ghaziabad, Noida and Greater Noida. Now metro work in Kanpur and Agra is almost complete. Along with this, DPRs for Metro in five other major cities-Gorakhpur, Varanasi, Prayagraj, Meerut and Jhansi are ready or in the final stages. The best of public transport will be available in these cities as well,” he said.

On the occasion of virtual unveiling of the first prototype train of Agra and Kanpur Metro, Kumar Keshav, Managing Director of UP Metro Rail Corporation and Managing Director of the manufacturing company M/s Alstom India Transport Limited congratulated all the officers and employees.

According to the information provided by the UP Metro Rail Corporation, the metro trains of Kanpur will have the feature of 'regenerative braking', with the help of which up to 45 percent of the energy through the brakes applied in the trains will be regenerated and used again in the system.  These trains will also have a state-of-the-art propulsion system to reduce air pollution. They will have Carbondioxide sensor based air conditioning system, which will run according to the number of passengers present in the train and will save energy.

Keeping in mind the automatic train operation, these trains will run on transmit based train control system. The passenger capacity of Kanpur Metro trains will be 974 passengers. The design speed of these trains will be up to 90 km/h and operation speed up to 80 km/h. The first and last coach of the train will have a separate space for wheelchairs for Divyangjan. There will be a 'Long Stop Request Button' near the wheelchair location, by pressing which the PwD can inform the train operator to keep the door open for a longer period of time so that they can get off the train comfortably.

The trains will also have fire extinguishers, smoke detectors and more. The metro trains of Kanpur will draw energy from the third rail that runs parallel to the tracks, so it will not require the setup of pillars and wires and the infrastructure will look better and beautiful. These trains are designed on the basis of state-of-the-art fire and crash safety standards. Each train will have CCTV cameras, the video feed of which will directly reach the train operator and the center security room.

Every train will also have USB mobile phone charging points as well as LCD screens or panels for infotainment. By pressing the talk back button, passengers will be able to talk to the train operator in case of emergency.

The location of the passenger and the footage of the CCTV will be directly visible on the monitor placed with the train operator.