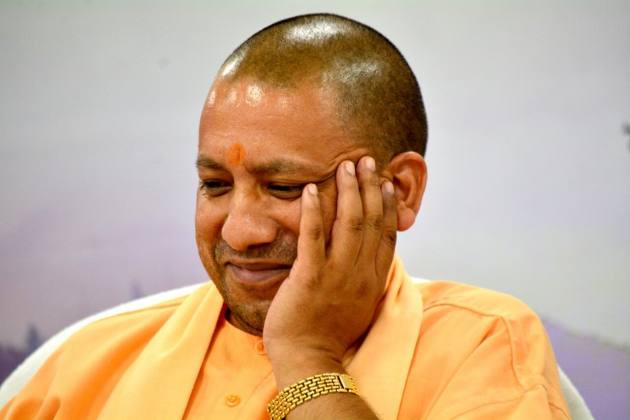 A two-page Uttar Pradesh government ad in a newspaper this morning has a message from Chief Minister Yogi Adityanath: “Today, people including women feel safe in the state. The achievements and progress in the last 4.5 years have changed the perception of the state at national and international level.”

Making ‘law and order’, with a specific mention of women’s security, its prime pitch, the ad also lists the schemes of the state government, statements by purported beneficiaries with their mug shot and location, and also says that the state has conducted the highest number of Covid 19 tests and vaccinations in the country.

On top of the page is a photo of Prime Minister Narendra Modi and below that a large, vertical, photo of a waving Yogi Adityanath.

The Chief Minister also claimed in an interview with Hindustan Times that law and order has been one of his government’s achievements. Asked about allegations of fake encounters in the state, he said that the police would retaliate if a criminal fires on them, as they had the right to self-defence.

“Generally people on the ground prefer the image of a strong Chief Minister who takes action against criminals. Mayawati had also cultivated this image during her heyday. Yogi has also done the same at the ground level, though there are voices in the intelligentsia that have a communal interpretation for it,” academic Badri Narayan told Outlook. “One undoing of Akhilesh Yadav as CM was the perception that law and order had deteriorated.”
Adityanath also emphasised in the interview with HT that multiple caste groups are represented in his Council of Ministers. The latest reshuffle in UP saw Jitin Prasada, a Brahmin, becoming Cabinet Minister. There were also three new OBCs, two SCs and one ST in the expanded Council of Ministers.

Badri Narayan says that reaching out to the extremely backward and marginal Dalit groups is now an established template for the BJP, but adds a nuance: “With the weakening of Mayawati, the BJP is now trying to attract not just non-Jatavs but also her own caste, the Jatavs.”

Paltu Ram, a Jatav, has been made minister in UP and Baby Rani Maurya, another leader from the same caste, is going to address public meetings for the BJP across UP, Narayan adds. Maurya, who is former governor of Uttarakhand, has been appointed national vice-president of the BJP on September 20.

Last year, after the encounter killing of gangster Vikas Dubey, there were media reports of a Brahmin-Thakur rift building in the state. From the SP to the BSP, opposition parties rushed to woo Brahmins, promising Parshuram statues. However, as a report in The Hindu shows, the Brahmins have the single largest representation in the Council of Ministers (11), followed by Thakurs at seven. There are 23 OBC ministers and nine Dalit ministers.

Apart from suggesting the electoral pitch of the BJP in UP – where instances like the Abba Jaan remark controversy offer an additional Hindutva spin – the statements of Adityanath also mark his self-projection as the party’s face in UP. This is in sync with other party leaders backing his leadership in the state in recent times.

Deputy Chief Minister Dinesh Sharma had also said in a recent interview that the leadership question was settled and Adityanath would be the face of the party.

This marks a shift from the scenario some months back, when RSS and BJP leaders were repeatedly visiting UP and Adityanath also went to Delhi to meet Prime Minister Narendra Modi, sparking media speculation that his popularity with party MLAs was on the wane.
“The state is being run through officials and MLAs are unable to get things done,” a BJP insider had told me at that time.

There were also media reports of a rift between the PMO and Adityanath, with Arvind Kumar Sharma, who is close to the PMO, not being given a Cabinet berth or deputy chief ministership in UP. He was eventually offered just the ceremonial post of party state vice-president.

Deputy CM Keshav Prasad Maurya had also said on record months back that the central leadership would take a call on the leadership question. However, Defence Minister Rajnath Singh had promptly cleared the air by putting his weight behind Yogi’s claim to leadership in the state.

Badri Narayan says that his field trips suggest that media reports of a rift were at odds with people’s perception on the ground. “Modi Yogi ek hi hain (Modi and Yogi are one and the same), people would tell me,” Narayan recalls.

The turn of events suggests a clear self-projection by Yogi Adityanath to return to power in UP. Even after much criticism over an ad that showed a flyover in Kolkata to be in UP, the state government’s campaign through ads and ground meetings is building up around the personality of Adityanath.