You Can Bring Change In Bengal By Defeating Mamata Didi In Nandigram: Amit Shah To Voters 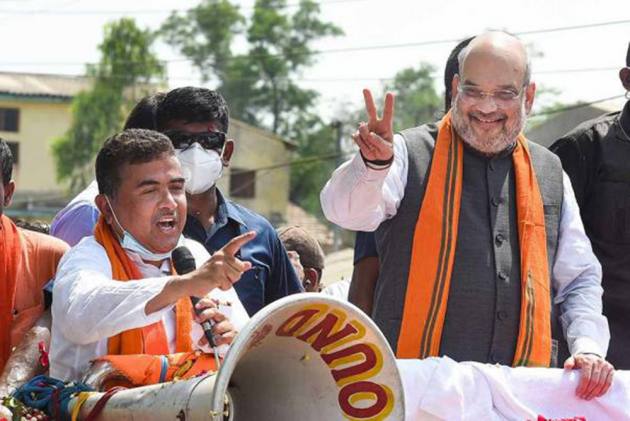 Taking a dig at West Bengal Chief Minister Mamata Banerjee, Union home minister Amit Shah on Tuesday said the people of the state can usher in change by defeating “Mamata didi in Nandigram” during the Assembly elections.

Shah made the comments while campaigning for TMC turncoat and BJP candidate Suvendu Adhikari, who is contesting against Banerjee from the Nandigram constituency.

"By defeating Mamata didi in Nandigram, you can bring about the much-desired change in West Bengal. You defeat her here, the TMC will automatically be defeated in other parts of the state," Shah said.

Referring to a recent incident of rape in Nandigram, Shah wondered why women are not safe in the state, despite "tall claims" made by Banerjee.

"She talks big about women's safety. What is the situation here? A woman was raped here, just a few kilometres away from where she has put up in Nandigram," he said.

Standing atop a lorry, decked with flowers and BJP flags, Shah, with Suvendu Adhikari by his side, waved at enthusiastic crowds that gathered along the four-km stretch between Bethuria and Rayapara in the East Midnapore Assembly segment.

Locals queued up on two sides of the road and watched the procession, which inched its way through the narrow streets amid chants of 'Jai Shri Ram', 'Narendra Modi Zindabad' and 'Amit Shah Zindabad'.

Many of them were seen shooting videos and clicking selfies at the roadshow.

All eyes are on battleground Nandigram, where West Bengal Chief Minister Mamata Banerjee has locked horns with her protege-turned-rival Adhikari.

The campaigning in the constituency, which will go to polls on April 1, is set to end at 5 pm today.