You Can Kill Me But You Can't Stifle My Voice: Jailed Activist, Now MLA Akhil Gogoi

Akhil Gogoi is the first-ever candidate in Assam to win an election from jail, where he has been since 2019 over violent protests against CAA 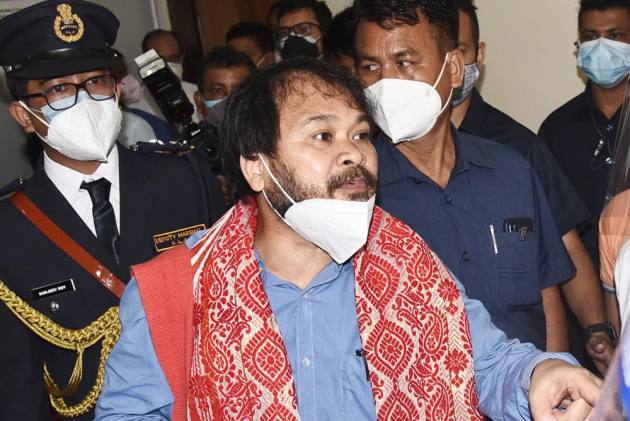 Jailed activist and political leader Akhil Gogoi was at his thundering best as a posse of policemen dragged and shoved him inside the Assembly to prevent him from speaking to the waiting media on Friday morning. Gogoi arrived at the assembly to take oath as MLA for the first time. All MLAs took oath on the first day of three-day assembly session -- the first of the 15th Assam assembly -- which began on Friday.

He had scripted history when he defeated BJP’s Surabhi Rajkonwar by 11,875 votes in Sivasagar to become the first-ever candidate in Assam to win an election while in jail where he has been since 2019 following violent protests against the Citizenship Amendment Act. The NIA court here had earlier allowed him to take oath.

Gogoi was brought to the assembly from Gauhati Medical College Hospital, where he is undergoing treatment, under tight security on a bus requisitioned by the police; such buses and Gogoi have become synonymous given the number of times he has had to be ferried on these to police stations or prison for allegedly breaking laws.

Jailed And Ailing, Peasant Leader Akhil Gogoi Takes On BJP Might And Wins In Ahom Heartland

As soon as he was brought down from the bus at the gate of the assembly, the accompanying policemen dragged him inside even as he protested vociferously at the manner of handling him. “How can you behave like this with an MLA inside the assembly,” he was heard shouting. “This is an insult to the Assamese people, this is murder of democracy, this is a fascist government,” he said. “You can kill me, but you cannot stifle my voice, I warn the BJP government…”

He was critical of chief minister Himanta Biswa Sarma, his bête noir of years. “It is not enough to be just seen to be working 24x7, he has to deliver,” he said. “Sarma is quiet on CAA. Just caning and torturing of people cannot be accepted, the government must run democratically and cannot be a fascist,” he said promising to raise all burning issues of the state on the floor of the assembly.

He was not sure whether he would be allowed the remaining two days of the session but said would take up the matter with the Speaker.

A large number of people, including staff of the assembly, could be seen taking selfies with him as Gogoi was clearly enjoying the new-found glory. Other big names like CM Himanta Biswa Sarma and former CM Sarbananda Sonowal were all there in the Assembly but the day certainly belonged to Akhil Gogoi.