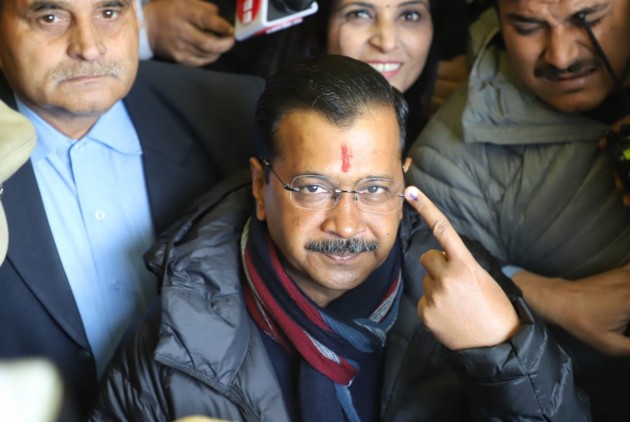 Chief Minister Arvind Kejriwal on Saturday said he is hopeful that the Aam Aadmi Party would form the government for the third time in Delhi.

The people of Delhi will vote based on the works done by the AAP government, Kejriwal said after voting along with his wife Sunita and son Pulkit at a polling booth in the Civil Lines area.

"Voted along with my family, including my first-time voter son. Urge all young voters to come out to vote. Your participation strengthens democracy," Kejriwal tweeted.

Voting for the 70-member Delhi Assembly is underway. The counting will be done on Tuesday.

Kejriwal earlier urged women to vote in the Delhi Assembly polls, saying like their home, the nation is also their responsibility.

In a tweet in Hindi, he said they should also take along the men in their houses for voting.

Polling for 70 Assembly Constituencies in Delhi began at 8 a.m. on Saturday. It will end at 6 pm. The results will be declared on February 11.

Over 1.47 crore people are eligible to exercise their franchise in the polls that will decide the fate of 672 candidates.