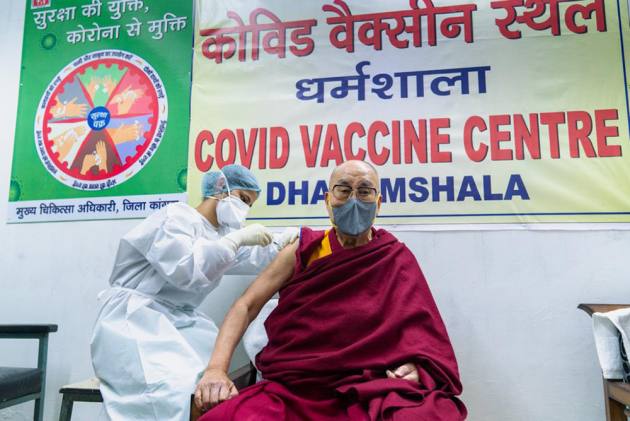 Stepping out of his palace in Himachal’s McLeodganj after spending one year in isolation, the Dalai Lama, received his first dose of the Covid-19 vaccine at Dharamshala’s Zonal hospital on Saturday.

Soon after his inoculation, the 85-year-old monk urged everyone to do away with any kind of doubts they may harbour regarding the vaccines and get the jabs. “The Covid-19 vaccines are safe and important for putting an end to the pandemic,” the Dalai Lama said.

The much-loved monk also posed with hospital staff for photos. “You are doing a great job for humanity,” the Dalai Lama said as he thanked the nurse who administered the vaccine.

The monk was vaccinated along with members of his core team, deputy commissioner Kangra Rakesh Prajapati told Outlook.

“We offered to set-up a vaccination centre at his palace but His Holiness decided to come down to the zonal hospital and get his first shot, like any other common man,” Prajapati said adding that the monk’s actions were praise worthy.

A huge crowd of followers and admirers had lined up the streets of Dharamshala to catch a glimpse of the Tibetan leader as he headed to the vaccination centre.

He further added that the monk and his staff were kept under observation for half an hour as per vaccination protocols.