By riding on bicycles in front of the Congress Bhavan here, Youth Congress protesters demonstrated with posters and flags as they raised slogans and demanded rollback of fuel prices. 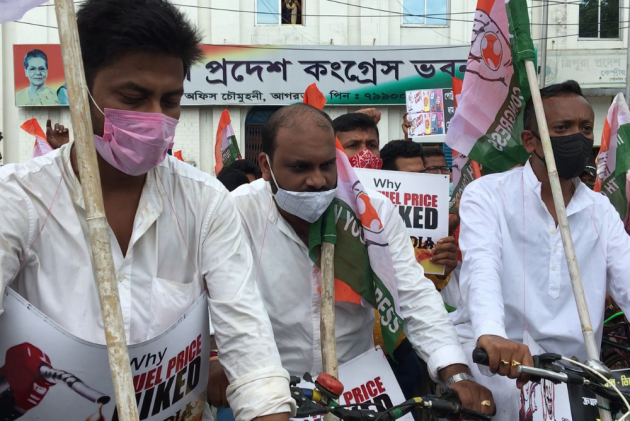 As part of a nationwide demonstration, the Youth Congress in Agartala protested against the repeated price hike of petrol, diesel and LPG cylinders.

By riding on bicycles in front of the Congress Bhavan here they demonstrated their protest as with posters and flags as they raised slogans and demanded rollback of fuel prices.

“On a daily basis the prices of petrol, diesel and LPG prices have been hiked and so the Youth Congress on the direction of the central leadership is protesting against it throughout India,'' said Pujan Biswas, Tripura state president of Youth Congress who led the protest.

He added, "In every district of Tripura protests are being held by riding bicycles against this fuel price hike and which has a cascading effect on the price of all daily necessary commodities.”

The Youth Congress chief alleged that the state administration is using the police and in the name of Covid who are arresting the protesters to throttle the voice of the common people and which is being raised by the Opposition against the BJP government in the centre and the state.

Meanwhile, within a few minutes of their protest, police had arrested them on the ground that they do not have any permission and moreover, due to the Covid-19 pandemic the state government had banned all gatherings like political, religious, cultural and others.