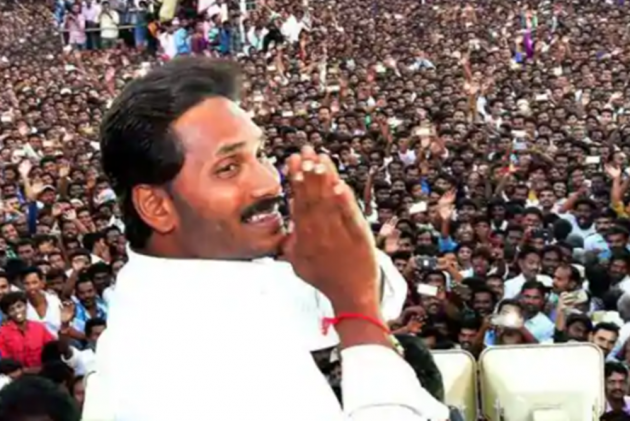 The ruling Yuvajana Sramika Rythu Congress Party (YSRCP) tsunami continues in Andhra Pradesh.  By bagging 73 out of 75 municipalities and all the 12 Corporations in urban cities, the opposition Telugu Desam Party (TDP) decimation is now almost near completion.

After faring badly in the 2019 general elections, the TDP-led by the media-savvy Nara Chandrababu Naidu failed to revive the party.  In the last 21 months, it lost the assembly and Lok Sabha polls, followed by Gram Panchayat polls last month and now the civic body polls.

Both the panchayat and civic body polls were held amid legal controversies.  The ruling party cited the pandemic scare to try and postpone both these polls, but this was overruled by the courts. This followed the ‘cold war’ that broke out between chief minister Y S Jaganmohan Reddy and the State Election Commissioner (SEC) Nimmagadda Ramesh Kumar. Suspecting him to be a spy of the TDP, the state government removed the SEC, but was embarrassed when the latter managed to get reinstated through a Supreme Court order.

Subsequently, the state government challenged the SEC’s order to hold panchayat polls, but this was rejected by both the state High Court and the Supreme Court. But there was some solace in the fact that the YSRCP swept the polls, with the TDP, the ‘power star’ Pavan Kalyan led Janasena and even the BJP and Congress getting wiped out in the Jagan Reddy wave.

Similarly, though the ruling party was initially against holding civic body polls, and cited the massive vaccination program, it accepted the challenge and repeated its winning spree. And last week, the YSRCP won all six seats in the state legislative council without any election, which takes its count in the 58-member council to 20.  “We succeeded in ensuring a “Congress-mukth” Andhra Pradesh for its central leadership decision to bifurcate the only Telugu state into two.  Now, the TDP-mukth Telugus too have become a reality,” gloated senior party functionary Ambati Rambabu.

While the ruling party is obviously delighted with these wins, the main Opposition party, the TDP,  appears unperturbed. “We expected this to happen,” said senior TDP functionary Gorantla Butchaiah Choudhary, who hails from paddy rich East Godavari district. “It’s no secret and quite common that any party in power wins the elections that follow for either the gram panchayats or civic bodies.  It enjoys the envious advantage of ‘muscle and money’ power, besides the government machinery.  That’s what happened now,” he said.

While admitting that the TDP leadership could do with some introspection, he said: “Winning and losing is quite common to any political party.  But the party which tries and fixes its shortfalls, if any, can bounce back.  In our case, I admit that the lethargy among top leadership has led to this path,” he said.

Choudhary was one of the founding members of the party and was known to be close to the party’s founder and president N T Ramarao, and held important positions as Vice-Chairman of State Planning Board of erstwhile Andhra Pradesh, and later as a Cabinet rank minister, during his tenure. But he was neutralized after he joined the Naidu’s camp much later, after NTR’s death.

Asked whether the party had any chances of bouncing back; Choudhary said it depended on the party leadership. “He (Naidu) knows better why senior party leaders and cadres are deserting him and joining the ruling party.”  He also noted that the Village Volunteers appointed by the ruling YSRCP to help unemployed youth get jobs had been a big reason for the successive electoral wins.

But TDP chief Naidu is unwilling to accept defeat gracefully. “I consider the elections are a big farce as it (the ruling YSRCP) misused  government machinery, especially the police, never heard of in the state history, to scare its opponents,” he said, adding: “Had there been fair and free polls, not only my party, but the other Opposition parties would not fared so badly.”