The development comes a day after the Malaysian authorities had summoned him over his alleged racial comments against the Hindus and Chinese. 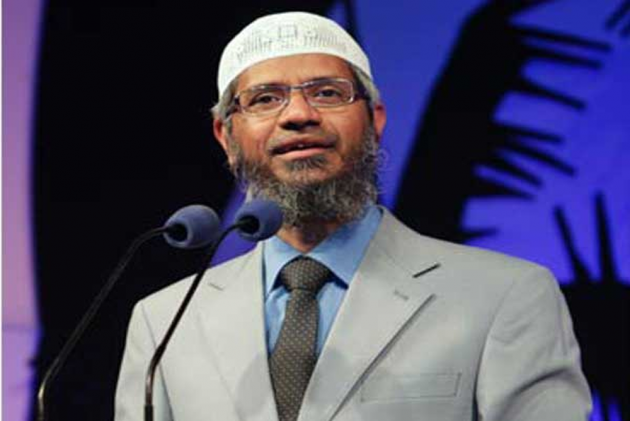 The development comes a day after the Malaysian authorities had summoned him over his alleged racial comments against the Hindus and Chinese. Naik has been residing in Malaysia over the past 3 years and enjoys popularity in a section of society there.

Bernama, the official news agency of Malaysia, said Naik, who is wanted in India for alleged money laundering and inciting extremism through hate speeches, was called for the second time to have his statement recorded at Bukit Aman, The Royal Malaysia Police Headquarters.

According to Free Malaysia Today, a local news website, reported that Naik spent close to 10 hours last night at police headquarters where he was questioned over remarks which drew flak from politicians and non-Muslim groups alike.

Naik was questioned under Section 504 of the Penal Code for the intentional insult with intent to provoke a breach of peace, as a result of remarks made in public speeches in Kota Baru, Kelantan.

The 53-year-old preacher, who is a permanent resident in Muslim-majority Malaysia, had his statement recorded for the first time on August 16, according to a report on Bernama.

Naik is alleged to have made controversial remarks against Malaysian Hindus and Malaysian Chinese during a talk in Kota Baru on August 3, prompting calls for him to be deported to India.

On August 3, Naik allegedly made controversial remarks against Malaysian Hindus and Malaysian Chinese during a talk in Kota Baru, triggering the calls fro him to be deported to India.

Responding to calls for his deportation from Malaysia by suggesting Malaysian Chinese should leave the country first as they were "old guests."

He also said that ethnic Hindus in Malaysia enjoyed "100 times more rights" than Muslims in India and that they believed in the Indian government more than the Malaysian one, media reports said.

Reacting to Naik's controversial comments, Malaysian Prime Minister Mahathir on Sunday said it was "quite clear" that Naik wanted to participate in racial politics.

"He is stirring up racial feelings. The police will have to investigate whether it is causing tension; obviously, it is," he said.

Mahathir added that as a permanent resident, Naik was not allowed to participate in politics.

"You can preach (religiously). But he wasn't doing that," he said.

"He was talking about Chinese going back to China and Indians going back to India. I have never said such things. But he did. That is politics," the annoyed Malaysian prime minister said.

On Monday, Melaka became the latest state to ban his speeches.

Naik has been banned from speaking in Melaka, said the Malaysian state's Chief Minister Adly Zahari.

Adly said the state government wants to avoid any issue that could strain ties between races, the Star reported on Monday.

“We want to maintain this. So we decided not to allow Mr Naik to hold talks or gatherings here," he was quoted as saying.

Last week, the northern state of Perlis banned him from speaking at an event, following public uproar over racially insensitive remarks which he had made.

Naik had already been banned from the Malaysian states of Johor, Selangor, Penang, Kedah and Sarawak.