With a young Irfan and a rejuvenated Sachin, captain Dravid sets off to a great start, with even the spin of the coin favouring him and decisions paying off. The young Pathan captured four early wickets to help skittle out the visitors for a paltry 122 in 35.4 overs before Sachin Tendulkar (70 not out) took centrestage with a magnificent display of strokeplay to quickly overhaul the target with 29.4 overs to spare and give the hosts a 2-0 lead in the seven-match series.

It was a stunning performance by the Indians who thoroughly outplayed the Lankans in all departments of the game, rendering the floodlit encounter at the PCA stadium in Mohali a totally lop-sided affair.

The visitors, who suffered a comprehensive 152-run defeat in the first match at Nagpur, were left clueless as Pathan wrecked the top order in eight consecutive overs to put India firmly in the saddle from the very first over of the contest.

The Baroda speedster returned with impressive figures of 8-0-37-4 as he ripped apart the top order to leave the islanders with the dubious distinction of being bundled out for the lowest-ever total at the ground.

The previous lowest was made by South Africa who had scored 178 for nine against India in 1993.

Kumar Sangakkara was the top scorer for the Lankans with 27 but none of the other batsmen could hang around for long in what turned out to be an abject batting surrender on a good track. 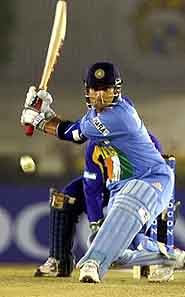 Tendulkar, appearing in his 350th one-day match, again gave glimpses of his vintage form with an array of breath-taking shots in all parts of the ground much to the delight of a capacity crowd who had plenty to cheer right through the day.

Chasing a modest 123 for a win, Tendulkar and Virender Sehwag launched the run chase on a rollicking note as the two batsmen attacked the bowlers from the word go.

Even the wily Muttiah Muralitharan was not spared as Tendulkar repeatedly stepped out to clobber the off-spinner with utter disdain.

Sehwag also looked in ominous form with a barrage of boundaries and picked up paceman Nuwan Zoysa for special treatment, blasting him for 14 runs in one over.

Tendulkar picked up the cue from him as he smashed Chaminda Vaas for ten runs in the very next over.

Sri Lankan captain Marvan Atapattu seemed to be totally lost for ideas as the two aggressive openers went about hammering the bowling to bring about 80 runs by the tenth over.

Sehwag perished just at the stroke of the interval as he was deceived by a slower one by Ferveez Mahroof, offering a simple return catch to him.

His 29-ball 38 contained five boundaries and a mighty six.

J.P. Yadav joined the action after Sehwag's dismissal and was quite content in playing second fiddle to the rampaging Tendulkar who showed no signs of being away from the game for six frustrating months because of an elbow injury. The maestro notched up his half century with a flowing drive off Maharoof and then celebrated the feat with another rasping boundary.

Just when it seemed India would cruise to victory without much problems, Yadav fell prey to Muralitharan who trapped him leg before for nine. It was Muralitharan's 50th ODI wicket against India.

The two teams will now travel to Jaipur for the third one-dayer to be held on October 31.

Earlier, the Sri Lankan innings began on a disastrous note as they lost the dangerous Sanath Jayasuriya in Pathan's very first over and the visitors could never really recover from the early jolt.

The left-handed Jayasuriya went for a big stroke much too early in his innings and offered a simple catch to Sehwag in the third man region much to the jubilation of the capacity crowd.

Atapattu, who is struggling to find form, dropped himself down the batting order and came in at the number three slot but the move did not bring him much luck as he again fell cheaply with the wiry Ajit Agarkar accounting for his dismissal.

Atapattu, who scored just four runs, edged an outgoing delivery to M.S. Dhoni behind the stumps to leave the islanders gasping at 13 for two in the fourth over. Vice-captain Mahela Jayawardene (7) soon joined his captain in the pavilion as he tried to flick a Pathan delivery but mistimed his stroke to spoon a simple catch to Venugopala Rao at the short mid-wicket region.

The Lankans suffered another setback when the in-form Sangakkara, who was promoted to open the innings, completely mistimed his stroke and ballooned a catch to Tendulkar at mid-on.

Pathan put himself on course for a hat-trick when he evicted Tillakaratne Dilshan off the very first ball with a gem of an inswinger, trapping the batsman plumb in front.

Mahroof managed to fend off the hat-trick delivery but not with any great conviction as the crowd spurred Pathan on as he ran in to bowl the crucial delivery.

Harbhajan Singh struck in his second over by plotting the dismissal of Russel Arnold who went for a defensive stroke but only succeeded in edging the turning ball to Rahul Dravid at first slip who latched on to a smart catch.

With the Lankan batting in total disarray at 80 for seven by the 21st over, the visitors decided to bring in Super Sub Upul Chandana to prop up the innings, leaving out Dilhara Fernando.

Mahroof and Chandana played very cautiously and were quite content in taking just the singles to take the team's score beyond the 100-mark which looked quite doubtful at one stage.