India On The Verge Of Ignominy

Weighed down by the target of 457 on a wearing track, the hosts find themselves at an embarrassing 105-6, still trailing by 351 runs with just four wickets in hand and possibly on the brink of one of their biggest Test defeats. India were on the brink of one of their biggest Test defeats after yet another batting collapse put Australia on course for a comprehensive victory in the first Test today.

Chasing a record target of 457 on a wearing track, the home team were gasping at an embarrassing 105 for six at close on the penultimate day, still trailing by 351 runs with just four wickets in hand.

Barring Rahul Dravid who waged a lone battle, none of the other Indian batsmen showed any application on a difficult track at the M. Chinnaswamy Stadium on a dramatic day's play which saw as many as 12 wickets fall.

Dravid was batting on a gritty 47 alongwith Irfan Pathan (7) with India still in danger of suffering their biggest defeat in Test history -- a margin of 329 runs against South Africa at the Eden Gardens in 1996-97.

The Indian batting disintegrated under the weight of a huge target. Whatever hopes one had of Saurav Ganguly's men making amends for the first innings debacle evaporated in thin air with the dismissal of Virender Sehwag for zero.

Umpire Billy Bowden's decision to rule him leg before might have been contentious, as TV replays showed a thick inside edge, but Sehwag's mouthing of the umpire -- sure to invite penal action -- only reflected the frustration of a batsman woefully out of form.

To add insult to injury was the run out of the captain although Dravid might have to share a fair bit of the blame as he failed to respond to Ganguly's call in time and leaving him little time to get back to his crease.

Shane Warne was one wicket away from equalling Muttiah Muralitharan's world record tally of 532 after having V.V.S. Laxman out for the second time in the match.

But it was the impeccable line and length of Glenn McGrath that dismantled the Indian top order.

The 34-year old New South Wales seamer had an opening spell figures of 5-4-1-1, and returned to break the fifth wicket stand between Dravid and Yuvraj Singh by inducing a faint edge of the latter's bat. McGrath ended the day with two for nine from 12 overs.

Sehwag lasted seven balls before McGrath rapped him on the pads.

Aakash Chopra (5) had a lucky escape early on when an awkardly rising delivery from Jason Gillespie bounced off the shoulder of his bat but fell out of Matthew Hayden's reach in the slip cordon.

But the right hander lasted just a little longer, falling leg before to the same bowler in the fourth over.

Then followed Ganguly's run out before Warne delivered the killer blow when his flipper caught Laxman (3) plumb in front.

Yuvraj Singh showed glimpses of his class as he picked Warne with precision. But his tendency to poke at deliveries away from the body landed him in trouble once again.

McGrath set up the dismissal with a plan only a stalwart of his calibre can, feeding him outside the off before bowling one much closer to induce the edge.

In the meantime, Dravid was sustaining India's hopes but living dangerously. He was having trouble against Warne and when on 14 a faint edge tipped Gilchrist's gloves before beating the first slip fielder to the third man boundary.

But 'The Wall' soon acquired the solidity that had come to personify his innings and began to time his shots well.

But with four wickets to claim and one full day's remaining, only the weather gods can save India.

The Chinnaswamy Stadium then had proved once again lucky for the visitors and a graveyard for the hosts.

Earlier, Australia were all out for 228 with Harbhajan Singh claiming his 13th career five-wicket haul. 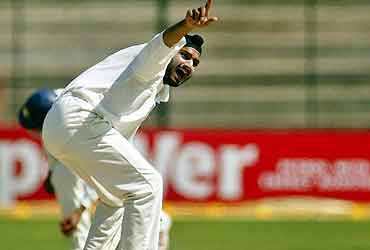 It was also the sixth successive occasion the offie had claimed five wicket in an innings against the Aussies on home soil.

The Australian innings also witnessed Gillespie walking although Steve Bucknor turned down an appeal for bat-pad catch off Harbhajan.

The 'Turbanator' started the day by dismissing first innings centurion Michael Clarke and the well-set Damien Martyn to put the skids under the Aussies.

Both Clarke (17) and Martyn (45) fell while trying to get on top of Harbhajan. The former groped forward in an effort to negotiate the spin but ended up bat-padding to Chopra at short leg.

Martyn had done well against the off-spinner and had carefully avoided the fate of Clarke until he stepped out and played an uppish flick for a simple catch to substitute Mohammad Kaif at short mid-wicket.

Till that moment, India had conceded only 20 runs in 15 overs. But Warne changed the complexion of the game a whirlwind knock of 31 from 49 balls with five fours.

In the very first over he faced Harbhajan, Warne swept his off break to the square leg boundary with devastating effect. One more similar sweep, and the offie went back on the defensive.

Anil Kumble, after a disappointing spell, managed to turn one big enough to force a bat-pad catch of Gilchrist.

Warne fell to Harbhajan with Yuvraj coming up with a sharp catch at short leg.