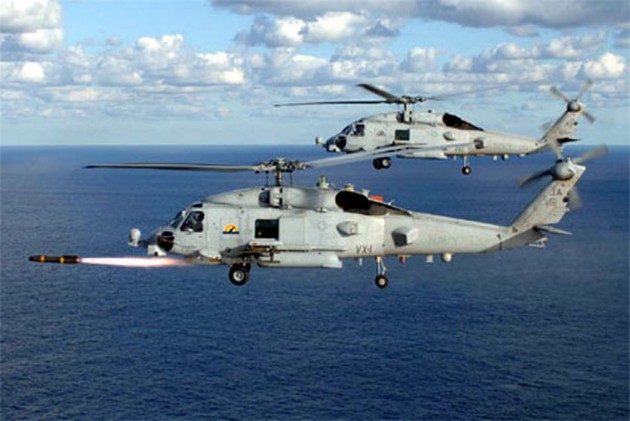 India has sought from the US 24 multi-role MH-60 'Romeo' anti-submarine helicopters for its Navy at an estimated cost of USD 2 billion, defence industry sources here said Friday.

India has been in need of these formidable anti-submarine hunter helicopters for more than a decade now.

The deal is expected to be finalised in a few months, informed sources told PTI, days after US Vice President Mike Pence held a successful meeting with Prime Minister Narendra Modi in Singapore on the sidelines of a regional summit.

India has sent a letter of request to the US for an "urgent requirement" of 24 multi-role helicopters – MH 60 Romeo Seahawk, sources said.

In recent months, there has been an acceleration in defence ties between the two countries, with the Trump administration opening up America's high-tech military hardware for India's defence needs.

Bilateral defence relationship was on top of the agenda of the Modi-Pence meeting in Singapore on Wednesday.

The meeting is likely to be followed by a summit-level bilateral between Prime Minister Modi and US President Donald Trump in Argentina on the sidelines of the G-20 meeting on November 30 and December 1. Neither side has confirmed the meeting yet.

According to sources, the MH-60 Romeo deal is expected to have an offset requirement. Sources indicated that India plans to follow up this urgent requirement with a long-term plan to manufacture 123 of these helicopters in India.

Currently deployed with the US Navy as the primary anti-submarine warfare anti-surface weapon system for open ocean and littoral zones, Lockheed Martin's MH-60R Seahawk helicopter is considered the world's most advanced maritime helicopter.

According to industry experts, it is the most capable naval helicopter available today designed to operate from frigates, destroyers, cruisers and aircraft carriers. MH-60 Romeo Seahawks would add lethal capabilities of the Indian Navy, which experts say is the need of the hour given the aggressive behaviour of China in the Indian Ocean region.

Lockheed over the years has emerged as a major American supplier of state-of-the-art defence military equipment.

"The pipeline of opportunities for US defence firms can result in another USD 5 billion of sales in the next few years," the source added.

As the Navy’s next generation submarine hunter and anti-surface warfare helicopter, the MH-60R Seahawk is considered to be the cornerstone of the Navy’s Helicopter Concept of Operations.

The MH-60R and its mission systems have replaced the US naval fleet’s legacy SH-60B and SH-60F aircraft.