Asked whether the US-China trade spat is advantageous to India, he said, "If war happens, elephants fight and grass gets affected. We are part of the grass. We don't want that”. 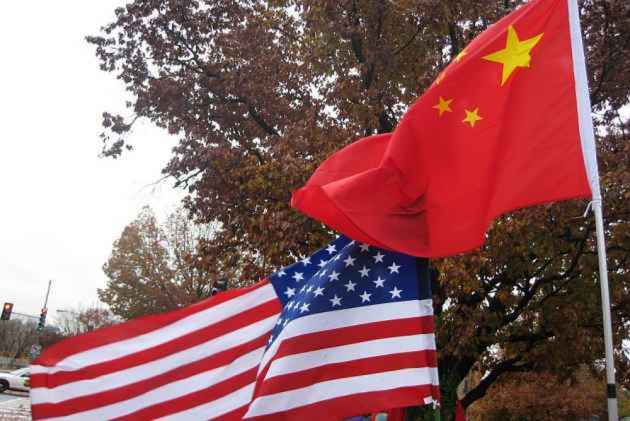 India today said it would not take sides in the ongoing trade spat between the US and China as it concluded the key Strategic Economic Dialogue with Beijing during which differences persisted over China's controversial Belt and Road Initiative (BRI).

During the talks, the BRI also came up for discussion.

"India suo motu has been the supporter of the rule-based multilateral trading order. In that sense, we don't have to take sides either one-way or the other," Kumar told the media when asked about India's stand on the current trade spat between China and US.

The SED, a key platform between India and China to discuss trade and economic issues, was resumed this year after last year's disruption amid Dokalam standoff.

The meeting took place amid growing rapprochement between the two countries after the standoff.

His remarks came as the US and China announced tit-for-tat tariffs on each other's products. US President Trump is ramping up pressure on China to cut the USD 375 bilateral billion trade deficit.

"While India does not like any measures that harm the rule based international trade regime, there is no reason to take sides in this," he said.

"We are not that level of player in the market. Our shares are much smaller. We are the takers of the rules than makers," he said.

Kumar mentioned the US and Japanese trade war in late 1980 when Washington successfully pressured Japan to cut the trade deficit.

"That is what the US is still expecting. If you notice, both sides have announced their position (to cut tariffs) but they have not given the dates. This is posturing," he said.

"I don't think anybody is interested in trade war trade crisis," he said.

In his address at the SED yesterday, Kumar made a strong pitch for China to allow India's exports of soybean and sugar.

Soybean is regarded as most important for US farmers and China is the largest importer. China has threatened to impose 25 per cent tariffs on its imports if Trump went ahead with his tariff plan for China.

Elaborating on his stand in asking China to import soybean and sugar from India, he said, "My hint was much more towards agricultural tariffs in China than anything else".

Asked whether the US-China trade spat is advantageous to India, he said, "If war happens, elephants fight and grass gets affected. We are part of the grass. We don't want that” Kumar said, adding that the US and China being the world's top two economies are giants.

Apparently, China has raised the BRI at the SED for which India responded raising its concerns over the sovereignty issue regarding the China-Pakistan Economic Corridor (CPEC) as it is being laid through Pakistan-occupied Kashmir (PoK).

Kumar said Chinese brought up the BRI issue and the Indian delegation responded by saying it is a matter of sovereignty which cannot be compromised.

The Chinese side "extolled" the BRI virtue and emphasised how it is "completely nonconflictual and respectful of sovereignty and independence", he said.

"After hearing India's response they chose to ignore it," he said.

But at the same time there was no reference to the CPEC and it is covered in the sovereignty-related concerns raised by India, Kumar said.

"Both sides recognise the differences over the issue. But there is sufficient scope within the defined redlines to take the development cooperation forward," he said.

There was a discussion at the SED about the Bangladesh, China, India, Myanmar (BCIM) corridor. While China says it is a part of the BRI, India says the project predates that.

Kumar said the main focus for India is Asian trilateral highway. The BCIM is work in progress.

Currently Bangladesh and Myanmar are not interested in it in view of the Rohingya refugee crisis, Kumar said.

China for its part appreciated India's Act East Policy to improve connectivity in the north-eastern states.

He said the core message from the SED was that "we must focus incessantly and unremittingly on the development cooperation possibilities despite differences".

"Major take away for India was that China has expressed interest in joining the International Solar Alliance mooted by India," Kumar said.

"It seems we have an opening. If that happens it can be a big shot the arm," he said.

There were some "positive noises" from China on investing in Prime Minister Narendra Modi's scheme for housing for all Indians by 2022.

Kumar yesterday said that there was immense potential to set up special clusters for Chinese investments like textiles, leather, food processing, electronic components and pharmaceuticals.