A series of successful test-firing of the Extended Range Pinaka rocket system (Pinaka-ER) was carried in the last three days, the defence ministry said. 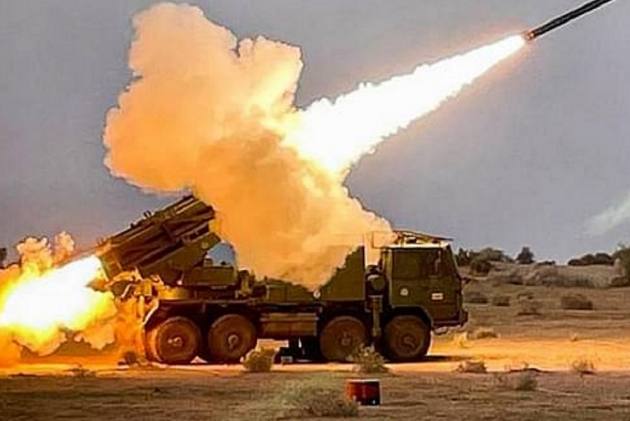 A series of successful test-firing  was carried in the last three days.

The rocket systems that were tested at Pokharan field firing ranges were manufactured by a private industry following transfer of technology by the Defence Research and Development Organisation (DRDO).

"The DRDO, along with the Army, conducted series of performance evaluation trials of these industry produced rockets at field firing ranges during the last three days," the defence ministry said.

"In these trials, enhanced range Pinaka rockets were test-fired at different ranges with various warhead capabilities. All the trial objectives were met satisfactorily," it said in a statement.

While the Pinaka MK-I rocket system has a range of around 40 km, the Pinaka II variant can hit targets at a distance of 60 km. The range of the Pinaka-ER (MK-I variant is not immediately known.

The ministry said the Area Denial Munition (ADM) variants of the munition for Pinaka, produced under the technology transfer, were also tested successfully at Pokhran field firing ranges.

It said 24 rockets were fired for different ranges and warhead capabilities.

The ministry said DRDO, after establishing the performance efficacy of the Pinaka-ER, transferred its technology to the industry.

"The industry partner has manufactured enhanced Pinaka Mk-1 rockets with DRDO's handholding during the production and quality assurance," it said.

"In continuation of the transfer of technology absorption, rockets developed by the industry have undergone the performance evaluation and quality certification process," the ministry said.

It said the indigenously-developed "proximity fuzes" for Pinaka rockets have also been tested.

"After design validation trials, dynamic performance evaluation of these fuzes have been evaluated with flight testing. Consistency in performance of fuzes has been established in consecutive flight trials," the ministry said.