2+2 Dialogue: India, US Ask Pakistan To Act Against Terror Emanating From Its Soil 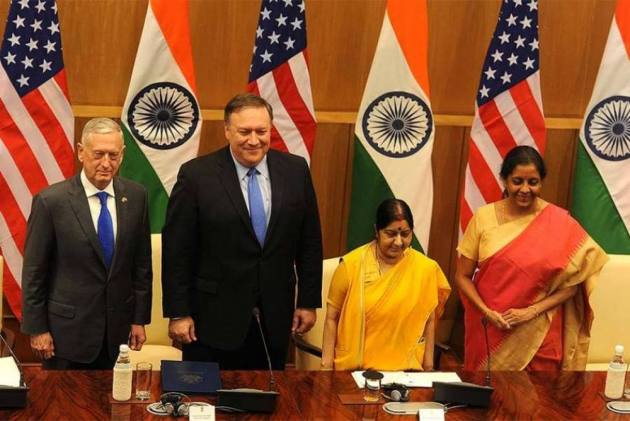 India and the US on Thursday asked Pakistan to ensure that its territory is not used to launch terror attacks and expeditiously bring to justice the perpetrators of cross-border terror strikes, including those on Mumbai, Pathankot and Uri.

The stern warning to Pakistan came after India and the US held their first 2+2 dialogue in Delhi during which External Affairs Minister Sushma Swaraj and Defence Minister Nirmala Sitharaman held wide-ranging deliberations with US Secretary of State Michael R Pompeo and Defence Secretary James Mattis.

"The ministers announced their intent to increase information-sharing efforts on known or suspected terrorists and to implement UN Security Council Resolution 2396 on returning foreign terrorist fighters," a joint statement issued after the talks said.

"The ministers denounced any use of terrorist proxies in the region, and in this context, they called on Pakistan to ensure that the territory under its control is not used to launch terrorist attacks on other countries," it said.

Ahead of the 10th anniversary of the 2008 Mumbai attack, they also called on Pakistan to expeditiously bring to justice the perpetrators of the Mumbai, Pathankot (2016), Uri (2016), and other cross-border terrorist attacks, the statement said.

"We welcomed the recent designations of Lashkar-e-Taiba terrorists by the United States. They underscore the international community's scrutiny over the threat of terrorism emanating from Pakistan, which has affected India and the United States alike.

"In the 10th anniversary of the 26/11 attacks, we recognised the importance of justice and retribution for the masterminds behind this terrorist attack," she said.

Sitharaman, in her remarks, said India and the US were committed to work together to combat the "persistent threat of terrorism" and other shared security challenges.

The ministers committed to enhance their ongoing cooperation in multilateral fora such as the UN and Financial Action Task Force (FATF), and reaffirmed their support for a Comprehensive Convention on International Terrorism that will advance and strengthen the framework for global cooperation and reinforce the message that no cause or grievance justifies terrorism, the joint statement said.

"The ministers welcomed the launch of a bilateral dialogue on designation of terrorists in 2017, which is strengthening cooperation and action against terrorist groups, including Al-Qaida, ISIS, Lashkar-e-Taiba, Jaish-e-Mohammad, Hizb-ul Mujahideen, the Haqqani Network, Tehrik-i-Taliban Pakistan, D-Company, and their affiliates," it said.

The two sides further reaffirmed their commitment to ongoing and future cooperation to ensure a stable cyberspace environment and to prevent cyber attacks.

Swaraj said India recognises the value of the Terrorists Designations Dialogue established last year as well as other mechanisms to promote cooperation in counter-terrorism and homeland security.

"We also discussed the situation in South Asia in some detail. India supports President Trump's South Asia Policy. His call for Pakistan to stop its policy of supporting cross-border terrorism finds resonance with us," she said.

Swaraj said the efforts by India and the US in promoting an Afghan-led, Afghan-owned and Afghan government-controlled reconciliation process were also discussed.