India declared a ball after Jadeja reached his maiden century, at 649/9. This is the highest innings total in the fixture, beating the previous highs of 644/7d by India at Kanpur in February 1979 and 644/8d by West Indies at Delhi in February 1959. 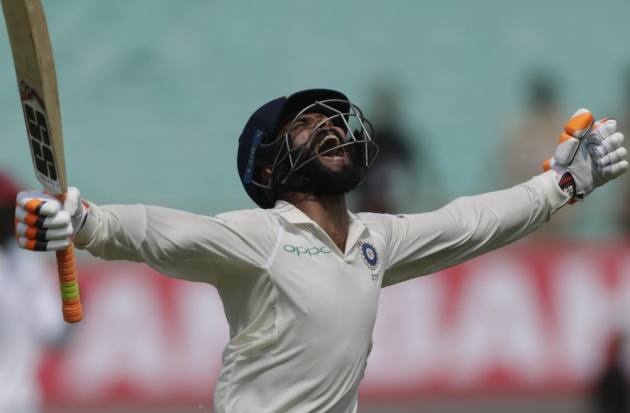 India all-rounder Ravindra Jadeja scored his maiden hundred on Friday as India took complete control of the Rajkot Test on the second day.

Jadeja, 29, reached the landmark off the fourth ball in the 150th over, bowled by Kraigg Brathwaite. He remained unbeaten on 100, after facing 132 balls. He hit five fours and five sixes.

The Saurashtra player then looked upwards and ran  with hands spread out. Watch it here, courtesy BCCI:

And, here comes the maiden Test ðÂÂÂÂÂÂ¯ for @imjadeja, followed by the declaration by the Indian Captain.#TeamIndia 649/9d

But his best celebration happened earlier in the day when he reached fifty.  Watch it here:

FIFTY!@imjadeja celebrates his 10th Test 50 in his unique way ðÂÂÂÂÂÂºðÂÂÂÂÂÂº

Jadeja's previous best was 90 against England at Mohali in 2016.

India declared a ball after Jadeja reached century at 649/9. This is the highest innings total in the fixture, beating the previous highs of 644/7d by India at Kanpur in February 1979 and 644/8d by West Indies at Delhi in February 1959.

This is also the 31st time that India have scored 600 and more runs in an innings, second only to Australia's 34.

In a dominant display, India plundered runs against the hapless Windies bowling attack. Only two batsmen, Lokesh Rahul (0) and Ravichandran Ashwin (7), got out without posting double-digit scores.