Young Kuldeep became the first chinaman bowler to take a five-for in shortest format as he single-handedly restricted England to below-par 159 for 8 on a flat deck. 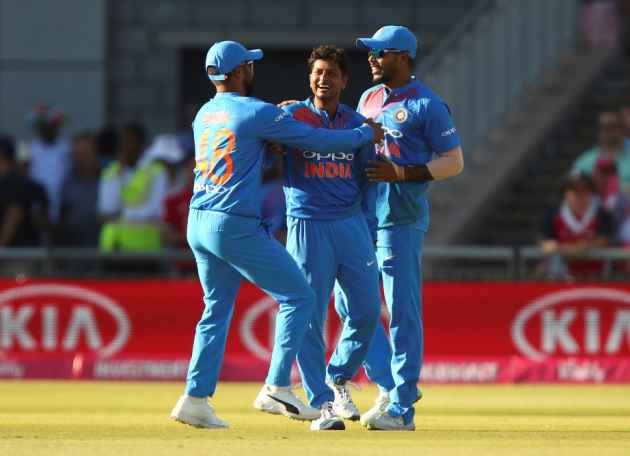 Young Kuldeep (5/24 in 4 overs) became the first chinaman bowler to take a five-for in shortest format as he singlehandedly restricted England to below-par 159 for 8 on a flat deck.

Then it was the turn of opener Rahul, who smashed his second T20 International hundred en route his 54-ball-101 as India comfortably chased the target in 18.2 overs.

He added 123 runs for the second wicket with Rohit Sharma (32 off 30 balls), who played the role of second fiddle to perfection.

Rahul's innings had 10 fours and as many as five sixes and Manish Pandey's injury proved to be a blessing in disguise as the talented Karnataka opener got a chance at No 3 with skipper Virat Kohli pushing himself down the order.

It was the Indian captain, who finished the match with a six off Moeen Ali to remain unbeaten on 20.

Earlier, Kuldeep left the English batsmen in a daze with his magical spell of wrist spin, restricting them to a manageable total.

Kohli's decision to bowl was vindicated by young Kuldeep, who broke the backbone of the England batting with his career-best figures and a maiden five-wicket haul.

This was after a solid start provided by in-form openers Jos Buttler (69 off 45 balls) and Jason Roy (30 off 20 balls), who added 50 in the first five overs of Powerplay.

However from a relatively comfortable 95 for 1 in the 12th over, Kuldeep removed rival skipper Eoin Morgan (7), Jonny Bairstow (0) and Joe Root (0) in the 14th over, which prevented England from posting a competitive total on a placid track.

That England lacked homework while facing Kuldeep was evident with the likes of Bairstow and Root being left in a tangle. They were both deceived by flight and failed to read the turn off the pitch, getting out off successive deliveries.

Root and Bairstow haven't seen much of Kuldeep as he was not a part of the last Test series against England in India and these two batsmen don't play IPL. It was evident as they didn't have a clue as to which way the ball would turn. He bowled 14 dot balls.

These two dismissals were preceded by downfall of Alex Hales (8) and skipper Eoin Morgan (7) and followed Buttler, who was frustrated with wickets falling like ninepins at the other end.

Kuldeep's effort was even more praiseworthy considering that his fellow left-arm spinner Yuzvendra Chahal (0/34 in 4 overs) had an off-day. So did Bhuvneshwar Kumar (0/44 in 4 overs), who had a rare off day in office.

However England started off well with both Buttler (8x4, 2x6) and Roy (5x4) hitting a flurry of boundaries off Bhuvneshwar but Umesh Yadav (2/21) quickly found his ideal length.

He hit the back of the length area to castle Roy. Hales, who came in next was edgy from the start and wasted precious deliveries before he tried to sweep Kuldeep and was bowled round the legs.

Skipper Morgan wanted to get going but misread the flight as he was holed at deep mid-wicket.

From 95 for 1, England were left tottering at 107 for 5 and never really recovered from that body blow dealt by Kuldeep.

David Willey (28 off 15 balls) should be given some credit for cameo as his two fours and two sixes got England past 150-run mark in the end.