Imran Khan's PTI emerged as the single largest party in the July 25 general election and it nominated him as prime minister. 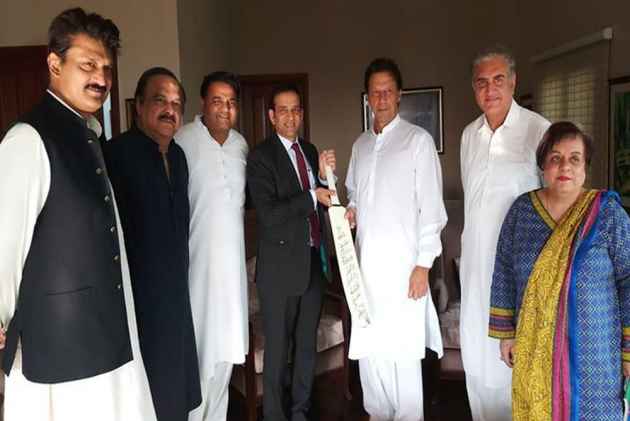 Indian High Commissioner Ajay Bisaria on Friday called on Imran Khan, who will take oath as Pakistan's prime minister on August 18, and felicitated the Pakistan Tehreek-e-Insaf chief on his success in the election.

Khan's PTI emerged as the single largest party in the July 25 general election and it nominated him as prime minister.

The Indian envoy met cricketer-turned-politician Khan at his Banigala residence in the suburbs of the capital.

He discussed various issues with Khan including the bilateral relationship and also presented him a cricket bat signed by the Indian cricket team.

Khan stressed the need to restart the dialogue between the two countries on all outstanding issues, including Kashmir. He also expressed concern over alleged human rights violations in the Valley, Pakistani media reported.

Khan also hoped for India's participation in the SAARC summit, scheduled to be held in Islamabad.

The SAARC summit was to be held in Islamabad in November, 2016 but after a major terror attack on an Indian Army camp in Uri in Jammu and Kashmir on September 18 that year, India expressed its inability to participate in the summit due to "prevailing circumstances" and stepped up diplomatic pressure on Pakistan.

The summit was called off after Bangladesh, Bhutan and Afghanistan also declined to participate.

The meeting between Khan and the Indian envoy came after Prime Minister Narendra Modi on July 30 called and congratulated the PTI chief on his electoral success.

The Indian envoy said that after Modi's telephone call to Khan, there was a new optimism in India that relations would move forward in the right direction, the Express Tribune reported.

"India is confident that relations with Pakistan will take a turn for the positive," the Dawn quoted Bisaria as saying.

Earlier, in his victory speech, Khan had also offered to build good ties with India.

He said Khan will take oath as prime minister on August 18.

Indo-Pak ties had been strained after the terror attacks by Pakistan-based groups in 2016 and India's surgical strikes inside Pakistan-occupied Kashmir. The sentencing of alleged Indian spy Kulbhushan Jadhav to death by a Pakistani military court in April last year further hurt bilateral relations.

The two sides often accuse each other of ceasefire violations along the Line of Control, resulting in civilian casualties.