Dhoni's team is the favourite to lift the World Twenty20 championship, unless.... 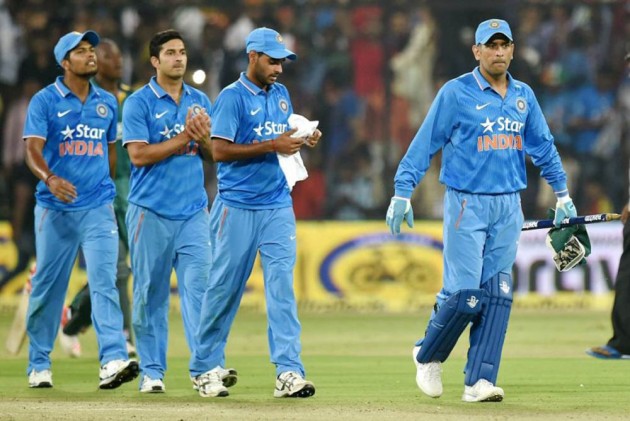 With 7 consecutive wins and 3 successive series victories under its belt, India has suddenly begun to look like the juggernaut of Twenty20 cricket. It was never in a more enviable position on the eve of a major cricket tournament featuring the crème de la crème of the world.

Having just won the Asia Cup in Bangladesh, without losing a single match, it must be added, after defeating the Aussies down under and the Sri Lankans in India, Mahendra Singh Dhoni and company are all set to enter the World Twenty20 with upbeat enthusiasm and soaring confidence.

India is the home of the IPL, which has added substantially to the craze and popularity of Twenty20 cricket across the world. And with the World Twenty20 coming to India means more teeth to a team already on a roll. The question almost everyone is asking is who will stop, if at all, the juggernaut in its own territory.

Already most critics, including former cricketers, have picked India as the overwhelming favourite to win the World Twenty20 despite Australia and South Africa being also in the fray. And rightly so. India has actually won 9 of its last 10 matches. A no mean feat by any count.

Apart from their recent success in cricket’s latest and shortest version, and also the fact that they will be playing in front of their own cheering crowds, what gives a clear edge to Dhoni and his boys over the rest is that they have been playing, and performing, as a perfectly cohesive unit of late.

Unlike Tests and ODIs, Twenty20s call for a higher amount of team effort because there is so much to do in a limited number of overs. Even a seemingly little contribution – say 2 runs or 3, a wicket or a run-out (no matter whether it is a top-order batsman or a tailender) at a crucial juncture – could be vital in a tight game.

“We must be in a really tough position for me to be playing 20-25 balls,” said Dhoni the other day about his role as a finisher. “I am looking at a 10-12 ball role for me.” Like the captain, the rest of the Indian players are also fully aware of the specific roles they have to play and what is expected of them.

India has arguably the world’s finest opening pair in Rohit Sharma and Shikhar Dhawan. Their ability to find the gaps and score at a brisk pace unsettles the opposition plan from the beginning itself. Besides being sweet timers of the ball, they can be really explosive and tear any attack to shreds.

Sharma in particular is the key to India’s success. He is a completely aggressive batsman. It is a measure of his genius that he has two double hundreds in ODIs and one three-figure mark in a Twenty20 international. He can be unstoppable once he is in his element, which he often is.

As if that were not enough, India’s middle-order is studded with gems like Virat Kohli, Suresh Raina, Yuvraj Singh and Dhoni, who all have proved their worth in Twenty20s and are in excellent form, too. (If required, the highly reliable, and always innovative, Ajinkya Rahane is another option in the middle-order.)

Fours and sixes matter a lot in Twenty20s and India’s frontline batsmen have a penchant for these flamboyant, crowd-pleasing and most productive hits to the fence. Sharma, Raina, Yuvraj and Dhoni revel in sixes, both off speedsters and spinners.

There is no more formidable batting line-up, at least for Twenty20 cricket, in the world. Even Australia, which successfully chased down an imposing target of 205, thanks to David Warner (77) and Glenn Maxwell (75), in a recent Twenty20 game against South Africa at Johannesburg, cannot match India’s batting.

But this is not enough. Down the order there are three tried and tested bits-and-pieces players – Hardik Pandya, Ravindra Jadeja and Ravichandran Ashwin – who have mastered the art of adding a few quicker runs towards the close of the innings. It is a different matter, though, that mostly they do not get to bat.

India may still have a weaker bowling attack when it comes to playing Tests and ODIs on sporting pitches abroad. But the same attack, a judicious mix of deceptive medium-pacers and crafty spinners, wears a totally new look, home and away, when the format is Twenty20.

The return of the intelligent and experienced Ashish Nehra has lent the much-needed sting to India’s pace attack. The inclusion of the young and fresh Jasprit Bumrah, who possesses a special gift to bowl stinging yorkers, has given some balance, as well as respect, to the pace bowling.

Nehra and Bumrah complement each other well. The seasoned southpaw’s clever use of the pitch and ability to seam and swing the ball fetches him plenty of wickets. In the boyish Bumrah the Indian captain has finally discovered an effective weapon for bowling at the death.

Today, there seems to be more variety in India’s pace attack than ever before in recent years. Pandya, whose admirers include Sunil Gavaskar, is also quite handy as a medium-pacer. He makes a good use of his height and is able sometimes to extract some extra pace even from the most docile of wickets.

The spin bowling is in the sure and safe hands of Ashwin and Jadeja. When necessary, or at least when he sees need for that, Dhoni does not hesitate to open the bowling with Ashwin’s off-spin. The captain also employs the golden arms of both Yuvraj and Raina from time to time.

These are the nucleus that makes India such a force in Twenty20 cricket. Given their individual and combined talents, their current form and their extended winning streak, Indians look poised to dominate the World Twenty20 and add one more crown to their collective heads.

But the very nature of Twenty20 cricket is such that one bad performance and the whole party can be spoiled. Complacency kills. The Indian players will have to ensure that they do not rest on their recent laurels. Every match is a new game, a new challenge.

Also, to underestimate certain teams will be suicidal. England, boasting a dynamite like Alex Hales, may prove to be the dark horse of the tournament. Australia, New Zealand and South Africa are capable of posing serious threats to India. They have as good a chance of winning the event as the host.

In the final analysis, however, Twenty20s are a lottery. It boils down to one good innings or bowling spell, one bad batting performance or bowling display. The key to success is how you handle the given situation, how you plan your moves, your game, in given circumstances.

Cricket is played as much in mind as on the field and Twenty20s are no exception to the rule. It is not enough to go by your instincts. You have to use your intelligence, too, in equal measures. Of course, collective talents are the prerequisite for any team. The rest depends on how you make the use of your skills in a given situation.

It is just that the Indian team is currently on a high. But to sustain the winning streak has its own challenges. Apart from India, there are other teams capable of reaching the semifinals. And they will not spare efforts to halt the march of the juggernaut.