'Indian Muslims Will Live For India. They Will Die For India'

If anyone thinks Indian Muslims will dance to their tune, they are delusional, said the PM. 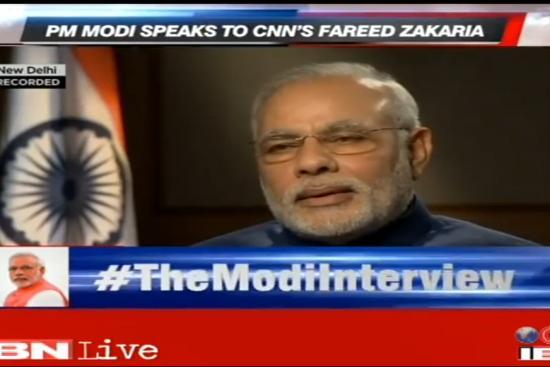 Fareed Zakaria: After your election people have begun asking again a question that has been asked many times for the last two decades, which is, will India be the next China. Will India be able to grow at 8-9 % a year consistently and transform itself and thus transform the world?

Narendra Modi: India does not need to become anything else. India must become only India. This is a country that once upon a time was called ‘the golden bird’. We have fallen from where we were before. But now we have the chance to rise again. If you see the details of the last five or ten centuries, you will see that India and China have grown at similar paces. Their contributions to global GDP have risen in parallel, and fallen in parallel. Today’s era once again belongs to Asia. India and China are both growing rapidly, together. That is why India needs to remain India.

Fareed Zakaria: But people would still I think wonder can India achieve the kind of 8 & 9 % growth rates that China has done consistently for 30 years and India has only done for a short period.

Narendra Modi:It is my absolute belief that Indians have unlimited talent. I have no doubt about our capabilities. I have a lot of faith in the entrepreneurial nature of our 1.25 billion people. There is a lot of capability. And I have a clear road-map to channel it.

Fareed Zakaria: China’s behavior in the east China seas and the south China seas over the last two years has worried many of its neighbors. The head of the governments in Philippines and Vietnam have made very sharp statements worrying about it. Do you worry about it?

Narendra Modi: India is different. It is a country of 1.25 billion people. We can’t run our country if we get worried about every small thing. At the same time, we can’t close our eyes to problems. That’s why India maintains that we are now in a different era. We are not living in the eighteenth century. China is also a country with an ancient cultural heritage. Look at how it has focused on economic development. It’s hardly the sign of a country that wants to be isolated. It wants to stay connected. That is why we should have trust in China’s understanding and have faith that it would accept global laws and will play its role in cooperating and moving forward.

Fareed Zakaria: Do you look at China and feel that it has been able to develop as fast as it has, really the fastest development in human history, because it is an authoritarian government, because the government has the power to build great infrastructure, to create incentives for investment. Do you look at that and think to yourself that that would be, there is a price to democracy that you have to do things a little bit more slowly.

Narendra Modi: If China is one example, then democratic countries provide another example. They have also grown fast. You can’t say that growth is not possible because of democracy. Democracy is our commitment. It is our great legacy, a legacy we simply cannot compromise. Democracy is in our DNA.

Fareed Zakaria: You don’t look at the power of the Chinese government and wish you had some of that authority.

Narendra Modi: I have a one word answer: YES. And with great confidence I say "yes”. Let me explain. There are many similarities between India and America. If you look at the last few centuries, two things come to light. America has absorbed people from around the world … and there is an Indian in every part of the world. This characterizes both the societies. Indians and Americans have coexistence in their natural temperament. Now, yes, for sure, there have been ups and downs in our relationship in the last century. But from the end of the 20th century to the first decade of the 21st century, has witnessed a big change. Our ties have deepened. India and the United States of America are bound together, by history and by culture. These ties will deepen further.

Fareed Zakaria: So far in your contacts with the Obama administration, you have had several cabinet ministers come here. Do you feel that there is a genuine desire from Washington to try to upgrade the relationship with India substantially?

Narendra Modi: Relations between India and America should not be seen within the limits of just Delhi and Washington. It’s a much larger sphere. The good thing is that the mood of both Delhi and Washington is in harmony with this understanding. Both sides have played a role in this.

Fareed Zakaria: With regard to Russia’s action in Ukraine. India has not been particularly active. Do you, how do you view Russia’s annexation of the Crimea.

Narendra Modi: Firstly, whatever happened there, innocent people died in a plane accident. That’s very saddening. These are not good things for humanity in this age. We have always expressed those views. There is a saying in India that the person who should throw a stone first is the person who has not committed any sins. In the world right now, a lot of people want to give advice. But look within them, and they too have sinned in some way. Ultimately, India’s view point is that efforts need to be made to sit together and talk, and to resolve problems in an ongoing process.

Fareed Zakaria: One of the areas that India has come on to the world scene or people have read about and heard about it, which has been unfortunate has been violence against women. This issue of rape. Why is it you think that there is this problem of, it seems persistent discrimination and violence against women in India and what do you think can be done about it?

Narendra Modi: Look, us political pundits shouldn’t tangle ourselves up in knots by searching for the root cause of this problem. More damage is done by statements from political pundits. Dignity of women is our collective responsibility. There should be no compromise in this matter. There should be no erosion in the law and order situation. We have to revive the family culture in which a woman is respected and considered equal, her dignity encouraged. The main thing here is girl child education. By doing so the possibility of empowerment will increase. On August 15, my government pushed ahead a movement called: educate the girl, save the girl.

Fareed Zakaria: Ayman-al- Zawahiri the head of Al Qaida has issued a video and an appeal trying to create an Al Qaida in India. In south Asia he says but the message was really directed towards India and he says he wants to free Muslims from the oppression they face in Gujarat, in Kashmir. Do you think, do you worry that something like this could succeed?

Fareed Zakaria: Why do you think it is that there is this remarkable phenomenon that you have a 170 million Muslims and they seem to be almost no or very few members of Al-Qaeda. Even though Al-Qaeda is in Afghanistan and of course the many in Pakistan. What is it that has made this community not as susceptible?

Fareed Zakaria: When you look a year or two from now. Let us say a year from now. What would you like people to say that you have accomplished in your first year in office.

Narendra Modi: See the biggest thing is that the people of the country have faith. That trust should never break. The public should have faith that this is the government they elected, and it’s trying to work for their welfare with honesty and commitment. That’s the biggest thing. If I can win the confidence of the people of India—not from my speeches—but by actions, then the power of 1.25 billion Indians will come together to take the country forward.

Fareed Zakaria: How do you relax? What do you enjoy doing when you are not working?

Narendra Modi: Look, I’m not the "not-working” type. I derive pleasure from my work. Work gives me relaxation too. Every moment I am thinking of something new: making a new plan, new ways to work. In the same way that a scientist draws pleasure from long hours in the laboratory, I draw pleasure in governance, in doing new things and bringing people together. That pleasure is sufficient for me.

Fareed Zakaria: Do you meditate? Do you do Yoga?

Narendra Modi: I’m fortunate that I was introduced to the world of yoga and pranayama at an early age. That has been very useful to me. I always advise everyone to make this a part of their lives

Fareed Zakaria: You gave a long speech about the benefits of Yoga. Explain what you see them as.

Narendra Modi: Sometimes, we notice our mind works on one thing, the body on another, and time brings us in conflict. Yoga synchronizes the heart, the mind, and the body. That is Yoga

Read the PM's responses as given in Hindi