The video, as has later been turned out, is fake, and more than a year old 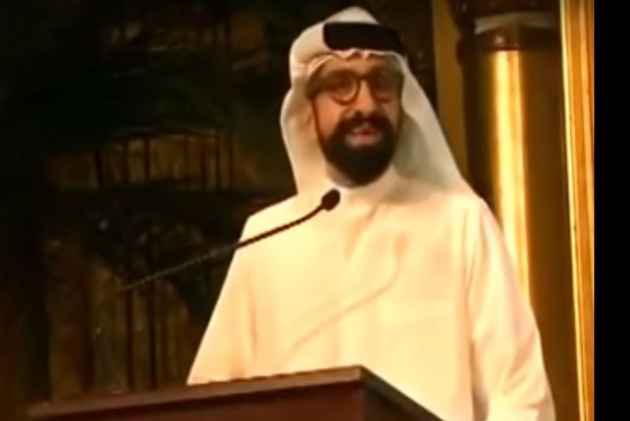 A video, claiming to show Crown Prince of Abu Dhabi Mohamed bin Zayed al Nahyan chanting 'Jay Siya Ram' during Indian Prime Minister Narendra Modi's visit to Abu Dhabi, was shared by mainstream Indian media houses, ahead of the PM's visit. The video, as has later been turned out, is fake, and more than a year old.

The video, shared by mainstream channel Times Now  and Zee News ahead of Modi's visit to the UAE claimed that Shaikh Mohammad Bin Zayed had chanted “Jai Siya Ram” while addressing a Hindu spiritual programme.  A report  by the Gulf News busted the fake news with true facts.

According to the report, Sheikh Zayed never attended any such event. The one in the video is Sultan Sooud al Qassemi, a UAE-communist and commentator on Arab affairs. The story has now been updated with the facts, but not before thousands of twitter users shared the fake news believing its face-value.

The fake video was tweeted with wrong caption to allegedly maximize the impact.

"Ironically, this fake and dangerous exercise gained traction on social media on a day when the Prime Minister witnessed the groundbreaking ceremony of the first Hindu temple in Abu Dhabi- made possible by the grand gesture of Sheikh Mohammad in donating land to the Indian community for the purpose," the report says.

“Times Now, for instance, tweeted the video at 3.45 pm Indian time on February 10, noting: “When the Abu Dhabi Crown Prince was invited on stage to share his views, he began his speech with ‘Jai Siya Ram’, sending the crowd into frenzy,” said the report.

Modi laid the foundation stone for the first Hindu temple in Abu Dhabi, the capital of the UAE, on February 11.

"The first Hindu temple in Abu Dhabi will come up on 55,000 square metres of land and the groundbreaking ceremony.. (is)..a historic event,"  Indian Ambassador to the UAE Navdeep Singh Suri had said.

Assuming that it’s a case of slip-up from the channels due to mistaken identity,  it is still more embarrassing because Crown Prince Mohamed bin Zayed was also a chief guest at the Republic Day parade in 2017, and had visited India as a state guest in 2016. Slamming Indian media, the Gulf News called the viral fake news a 'propaganda' by mainstream media channels, 'whether by choice or acts of commission.'

The report was also shared by the UAE embassy in New Delhi, on social media with the tweet: “Viral video clip in Indian media spreads false propaganda”