Ashwin and Jadeja did not offer even glimpses of the class that fetched them a plethora of wickets against South Africa. The Team India director Ravi Shastri deserves to be criticised more for this sorry state of affairs... 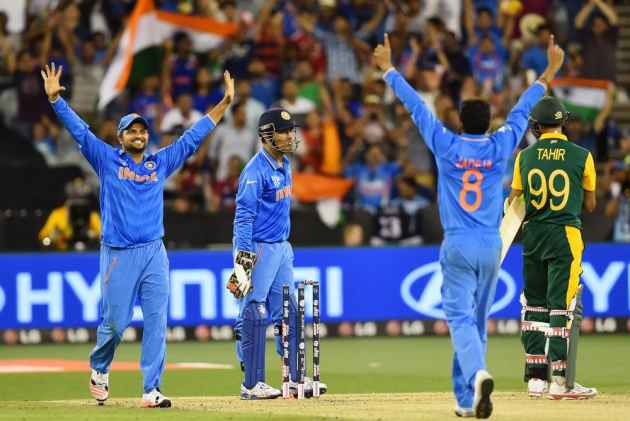 Ravichandran Ashwin and Ravindra Jadeja are India's leading and at times deadly spinners, albeit in favourable conditions, particularly on designer pitches at home. They were the wreckers-in-chief when India defeated South Africa in the recent home Test rubber. The Indian media, as has been their wont, went to town and sang paeans of the duo's rousing success. While the series win marked Jadeja's revival as a Test spinner with potential, it consolidated Ashwin's position as the world's No. 1 spinner. Or so we were led to believe.

But the suspicion that Ashwin and Jadeja were not truly tested for want of a real challenge, or fight, was not wholly unfounded. It has proved true beyond doubt now. They appear to be down Down Under, where the rampaging Aussie batsmen have thoroughly exposed them on wickets and in conditions completely unfavourable to their kind of bowling. Just look at their figures in the first two ODIs in Perth and Brisbane: Ashwin 9-0-68-0 and 10-0-60-0, Jadeja 9-0-61-0 and 9-0-50-0. Needless to say, India suffered heavy defeats as medium-pacers, too, failed to make any impact on the Aussies.

Unquestionably, there is a huge difference between Tests and ODIs.
??
But Ashwin and Jadeja did not offer even glimpses of the class and quality of their bowling that fetched them a plethora of wickets against South Africa. Leave alone being biting and stinging, they were deplorably ineffective. They never gave any impression of being in a position to take a wicket or two as Steven Smith (149 and 46) and George Bailey (112 and 76 not out) simply devastated them in Perth and Brisbane. And to think these were the very spinners who used to either open the bowling or come on early against the Proteas.

So desperate was the Indian team think tank — spearheaded by Ravi Shastri, who vehemently insisted on playing on dustbowls against South Africa at home — to win the third ODI in Melbourne and stay in the series that a bold decision was taken and Ashwin was dropped. Jadeja not only managed to hold on to his place but also took important wickets of Smith (41) and Bailey (23) for 49 runs in his 10 overs. But Glenn Maxwell (96) dashed India's hopes, completed a hattrick of Australia's successful run chase and gave the hosts an unassailable 3-0 lead in the five-match series.

The long-held belief that the Indian spinners are tigers at home but rabbits abroad has been confirmed once again. That the team selectors had to exclude Ashwin in the wake of his lack-lustre performance in the first two ODIs reflects badly on the quality of India's spin bowling overseas, particularly in a country like Australia, where pitches are more sporting and traditionally pace-friendly. The Melbourne wicket, on which the third ODI was played, is known to assist spinners. But Mahendra Singh Dhoni seems to have lost confidence in his star spinner.

It was not as if Ashwin and Jadeja did not have runs to bowl with. They had plenty of them in Perth and Brisbane and Melbourne thanks to Rohit Sharma, Virat Kohli and Ajinkya Rahane. When a team loses three ODIs in a row after setting fairly challenging targets of 310, 309 and 296, there does appear to be something seriously wrong with its bowling. India's strength being spin, and being the lead operators carrying heavier responsibility, both Ashwin and Jadeja have to shoulder their fair share of blame for insipid display and for letting the team down.

But it would be unfair to put the blame squarely on Ashwin and Jadeja.
??
The Team India director Shastri deserves to be criticised more. It was Shastri, more than the Test captain Kohli, who was vociferously against preparing sporting tracks in the last Test series, always harping on making wickets suitable to the strength of the home team being India's prerogative. Fair enough. But at what cost. If only Shastri and company had spared a thought on what would happen to the same Indian spinners when they went abroad and encountered difficult pitches.

As apprehended, the home series success against South Africa, achieved the way it was, was going to harm Team India than help. The rich harvest on tailor-made pitches probably gave wrong confidence to the spinners. And as they are not getting the kind of surfaces they need, they are coming a cropper in Australia. The medium-pacers, who hardly got to bowl almost throughout the four Tests, are now expected to not only bowl more but also produce desired results, especially when the spinners are failing to live up to expectations. What a situation.

The disaster Down Under should be a wake-up call for not only the Indian team management but also for the selectors. They must realise that we have got only Ashwin, and not Shane Warne, who could succeed on any surface in the world. It is high time India started making sporting wickets, which can help both the spinners and speedsters in equal measures. Spin bowling may continue to be our strength, but our new-ball bowlers also need to sharpen their talents and gain in experience in order to be able to take advantage of green and bouncy wickets abroad.