India’s Software And Japan's Hardware Can Do Wonders: PM Modi

Prime Minister Modi, who is on a two-day visit to Tokyo to participate in the 13th India-Japan Annual Summit. 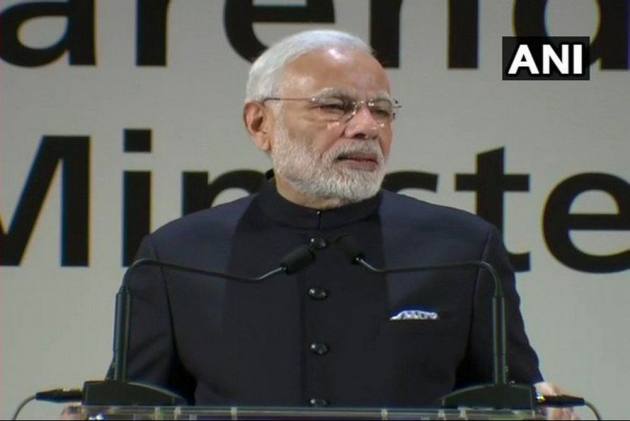 Addressing the business leaders from India and Japan, Prime Minister Narendra Modi on Monday urged the business community to boost investment in India.

Prime Minister Modi, who is on a two-day visit to Tokyo to participate in the 13th India-Japan Annual Summit, on Monday interacted with top market leaders at the Business Symposium on "Make in India, Digital Partnership and India-Japan Partnership in Africa" here.

Some years ago, I spoke about making a mini-Japan in India. It's a matter of great happiness for me that today, you are working in an even larger number in India: PM Modi at 'Make in India: India-Japan Partnership in Africa and Digital Partnership' seminar in #Japan's Tokyo pic.twitter.com/mL9XOchcsO

Will Be Friends Of India For Life: Japanese PM Shinzo Abe

He further noted that India and Japan share and support core democratic values, adding that the policies for cooperation and development shared by the two countries are similar.

When I took over the responsibility of the government in 2014, India was at 140th position in the 'ease of doing business' ranking of the World Bank. Now India has reached 100th position & we are working towards better ranking: PM Narendra Modi in Japan's Tokyo pic.twitter.com/lgIHtmXoBR

"In India, low-cost manufacturing is an advantage for businesses. The reason behind this is the competitive labour cost in the country. Similarly, our IT industry is one of our biggest strength. I have said this earlier that our software and Japan's hardware can come together to work wonders," the Prime Minister added.

He asserted that India is moving forward towards becoming a global hub of manufacturing and research due to initiatives like ‘Make in India’ programme.

Calling for cooperation between the two Asian giants, Prime Minister Modi reiterated that the mutual aid will be highly beneficial.

“India is progressively moving toward Industry 4.0 (current trend of automation and data exchange in manufacturing technologies) with the help of the latest developments in the field of technology such as AI, IoT, 3D, Printing, Robotics,” he added.

The two-day summit beginning on Sunday to reviewed the progress in ties and deepen strategic dimension of the bilateral relationship.

On his part, Prime Minister Shinzo Abe said the annual mutual visits by the leaders of Japan and India are an "active driving force" for the advancement of Japan-India bilateral relations.

"I am convinced that Prime Minister Modi's visit to Japan this time will also be fruitful as our previous meetings," he said.