At the draw of bails, Australia were 258/8 with Cummins and Lyon unbeaten on 61 and 6 respectively. 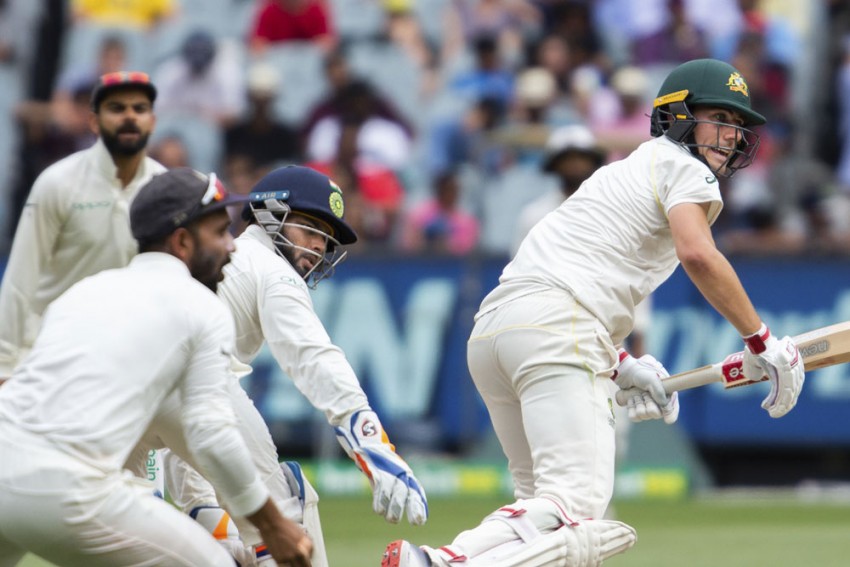 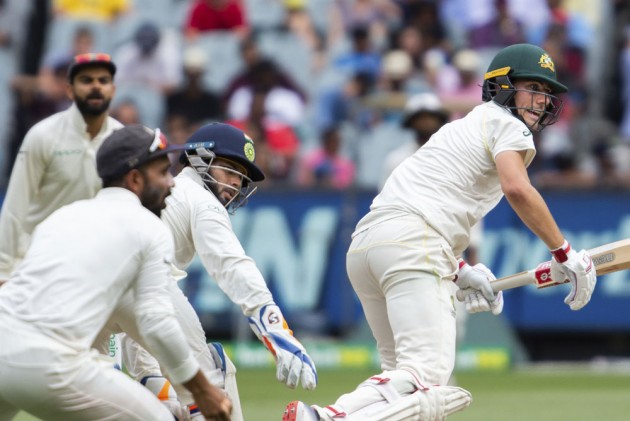 A defiant unbeaten half-century from all-rounder Pat Cummins denied India the pleasures of winning the Boxing Day Test on the fourth day at the Melbourne Cricket Ground (MCG).

On Saturday, India came close to taking a 2-1 lead in the four-match Border-Gavaskar Trophy series, but retired content with the knowledge that a win is inevitable for them unless some miracle comes to Australia's rescue.

Cummins came up with some heroic resistance lower don the order as the Australians battled desperately to somehow delay the by now inevitable defeat.

Left-arm spinner Ravindra Jadeja was the pick of the Indian bowlers with figures of 3/82 while fast bowlers Jasprit Bumrah and Mohammed Shami claimed two wickets each. Pacer Ishant Sharma also got a wicket.

Earlier in the day, India declared their second innings at 106/8 to set an improbable target of 399.

Post Tea, Travis Head (34) and Tim Paine (26) took their sixth-wicket partnership to 22 runs. The duo cut down on risky scoring shots and played for time.

But they couldn't last long, as Head played on off Ishant Sharma (1-37) in the 51st over. Paine though continued his resistance and put on 19 runs with Mitchell Starc (18), seeing through 11 overs in this partnership.

Jadeja got the breakthrough with Paine caught behind and it seemed like Australia’s last fight had gone out. But Cummins arrived at the crease to defy India, even as Starc was bowled off a rash swing against Shami (2/71).

India tried everything possible to get the final two wickets, with skipper Virat Kohli even convincing the umpires to go for the extra half-hour/eight overs seeing the possibility of a result.

Cummins though stood defiant as he brought up his second Test half-century off 86 balls, capping a fine day of Test cricket after taking career-best figures of 6/27 in the morning session.

Post lunch, Usman Khawaja (33) and Shaun Marsh (44) came out playing attacking shots and the scoring rate peaked at its highest for the duration of this Test.

The duo added 30 runs for the third wicket as India went on the backfoot a bit, and were waiting for breakthrough to come along.

It did as Shami trapped Khawaja lbw in the 21st over, but the batsman went for DRS review. It stayed in India's favour as he was too far back in his crease and was out plumb.

Shaun Marsh though continued to play his aggressive strokes and added 51 runs with brother Mitchell Marsh (10), as Australia crossed 100 in the 37th over.

Looking good for a tall score, Shaun Marsh was unlucky to be given out lbw against Jasprit Bumrah (2-53) in the 33rd over. He went for DRS review as well and the ball was shown clipping the stumps only marginally, thus out on umpire's call.

Mitchell Marsh looked to attack Jadeja but it didn't work as Australia lost a third wicket in this session. He mishit the ball straight to Kohli at extra cover in a bid to clear the ropes.

Australia were placed at 44 for two at Lunch after India declared at 106 for eight in their second innings with Pat Cummins taking career-best figures of 6-27.

Needing to bat five and a half sessions to save the match, Australia didn't get off to the best start as Aaron Finch (3) edged Bumrah to second slip in the second over.

Mayank Agarwal couldn't latch on to a tough chance at short leg off Khawaja three balls later otherwise it would have been an even poorer start.

The batsman then added 27 runs for the second wicket with Marcus Harris (13). The duo checked their shot selection, even as India wasted a review against Khawaja in Jadeja's first over.

The spinner struck in the 10th over though as a bat-pad chance got stuck under Agarwal's arm at short leg and Harris had to walk back, causing further trouble for Australia.

In the morning, India had batted 52 minutes and extended their second innings from overnight 54 for five even as threat of rain loomed large.

Play started on time though and India were batting with a plan to reach the 400-lead mark as quickly as possible.

Mayank (42) opened up with a couple sixes off Nathan Lyon (0-40) and made intentions clear, but was bowled off Cummins before he could get a second half-century in his maiden Test.

Rishabh Pant (33) and Ravindra Jadeja (5) threw their bats around to add 17 runs. They didn’t waste time in farming strike, with Cummins missing out on his five-wicket haul when Tim Paine dropped Pant early in the session.

He returned to pick up his sixth wicket when Jadeja gloved a catch to gully, beating his previous best of 6-79 against South Africa back in 2011.

India declared with Pant's dismissal in the 38th over.

The visitors had scored 443 for seven declared in the first innings thanks to Cheteshwar Pujara's 17th Test hundred. Jasprit Bumrah then picked career-best figures of 6-33 as Australia were bowled out for 151 runs in reply on day three, conceding a 292-run lead.

The four-match series is level at 1-1 after India won the first Test in Adelaide by 31 runs and Australia claimed the second in Perth by 146 runs.