India's Tour of Australia: Fans Brutally Troll Krunal Pandya After Getting Hammered At The Gabba

Krunal Pandya, who leaked 55 runs without success from his spell of four overs, was the prime target for angry fans, who also questioned the Indian team management's wisdom in selecting the Mumbai all-rounder. 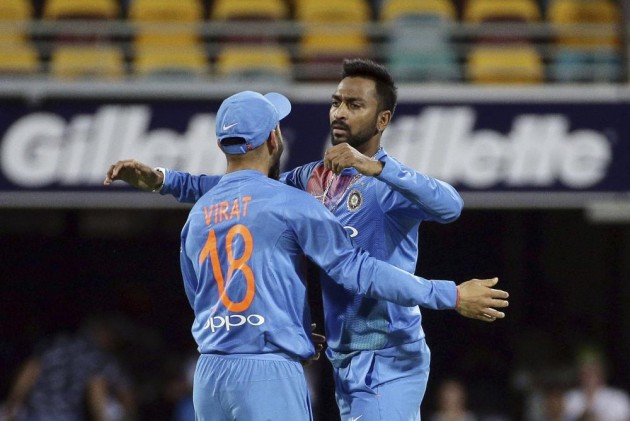 India entered the tour opening first Twenty20 International against Australia at The Gabba on Wednesday but ended up losing the rain-hit match by four runs despite scoring more runs.

After winning the toss, India captain Virat Kohli asked the Aussies to bat first. The hosts posted 158/4 after the match was reduced to a 17-overs-a-side match.

In reply, India scored 169 for seven in 17 overs but still lose the match thanks to D/L method.

Soon after the match, Indian fans took to social media sites to vent out their anger and blame the culprits. As it turned out, the rain and D/L rule were not the only ones who faced the wrath of Indian fans.

Krunal Pandya, who leaked 55 runs without success from his spell of four overs, was the prime target for angry fans, who also questioned the Indian team management's wisdom in selecting the Mumbai all-rounder.

It's another matter though that the Mumbai Indians player was hailed for his stupendous debut earlier this month against the West Indies.

India should never pick krunal pandya, he is neither a bowler nor a batsman. https://t.co/5fEQL5Wpxv

Hahahahaha...till yesterday Krunal Pandya was a great find for team India , and today he is criticised ... such a stupid thing

Its stupid to select players who have performed on flat wickets on Indian soil for a series to be played in Australia. Krunal Pandya doesn't qualify to be in the squad at the first place.

India are flirting with danger so close to the World Cup. Playing Krunal Pandya in place of @yuzi_chahal , Virat giving up No 3 to Rahul, not having potential World Cuppers Rayudu (No 4) and Kedar (No 6) in T20 in Aus will be prone to questions #AusvsInd

Why is Kedar Jadhav and Ravi Jadeja not in the T20 Squad ?
Rather than having Krunal Pandya and rishabh pant #AUSvIND sunny Gavaskar is right , Pant needs to go and learn right now , his time will come . Give the gloves to DK will also hand him loads of confidence

Please Include Me In Place Of Krunal Pandya. I Field Much Better And At Least I Draw The Match. ðÂÂÂÂÂÂÂÂÂðÂÂÂÂÂÂÂÂÂðÂÂÂÂÂÂÂÂÂ #INDvAUS #AUSvIND #INDvsAUS

Villains of the match:

For the record, Krunal joined an unwanted list of Indian bowlers who have conceded more than 50 runs in the shortest format of the game.

Yuzvendra Chahal, who was overlooked for the match, topped the list. He conceded 64 runs without success against South Africa at the Centurion in early this year in February. Joginder Sharma, who famously bowled the last over in India's World T20 triumph against Pakistan in 2007, is second with figures of 0/57.