Indo-Pak Dialogue Can Lower Pain Of People Of J-K: Tarigami

Referring to the recent killings, Tarigami said, “We have been demanding you must tell us who is behind all these killings and you must take action against those elements and make them accountable.” 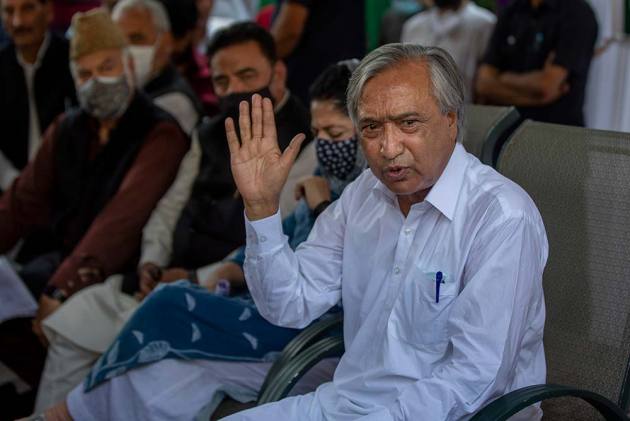 The dialogue between India and Pakistan should happen to end militancy and lower the pain of the people of Jammu and Kashmir, senior CPI(M) leader M Y Tarigami said on Monday, lashing out at the BJP government for its claim over the restoration of peace in the Valley after the abrogation of Article 370.

He also defended the repeated statements of the People's Alliance for Gupkar Declaration (PAGD) leadership including the National Conference and the Peoples Democratic Party (PDP) for talks with Pakistan and said “all the members of the alliance have suffered immensely and lost thousands of their leaders and workers to militant attacks”.

“There is peace along the borders in the aftermath of the renewed ceasefire agreement between India and Pakistan (in February). The ceasefire had not happened suddenly but was the result of the dialogue between India and Pakistan providing relief to the farmers on both sides who were suffering due to the cross-border shelling,” Tarigami, who is also convener and spokesperson of PAGD, told reporters here.

He said, “We support dialogue between India and Pakistan as it can lower our pain…the dialogue should happen and taken forward as it can provide relief to the people. This is our demand and request as well (to the governments of India and Pakistan).” Asked whether he supports dialogue despite unabated attacks by terrorists in the valley, Tarigami said, “If terrorism is ended then what will be the issue to talk.”

“India is a big and great country and it will not become weak by talking. Former prime ministers including A B Vajpayee and even Prime Minister Narendra Modi had talks with Pakistan and it should continue so that the killings should be stopped,” he said. Referring to the statement of Union Home Minister Amit Shah that Article 370 was responsible for militancy and its abrogation restored peace in J-K, the CPI(M) leader said “Give me the address of that promised normalcy which we do not find anywhere as the killings are going on unabated. The government has to take the responsibility”.

Responding to a question about some parties in the Gupkar alliance not “naming and shaming” terrorists for innocent killings and paddling soft separatism, he dismissed the propaganda and said, “…My opinion is that as far as Gupkar is concerned, all its constituents if you go through the records have suffered too much because of militancy.”

“(National Conference president and PAGD chief) Farooq Abdullah has been known in the country and J-K for his strong remarks against terrorism or against those who are sponsoring or encouraging it. Similarly, it was true for Mufti Mohammad Sayeed, the founder of the PDP. “This is not an issue of this party or that party, we are all victims of violence,” he said.

Referring to the recent killings, Tarigami said, “We have been demanding you must tell us who is behind all these killings and you must take action against those elements and make them accountable.” “We are not hesitating when security forces have committed excesses and we are not hesitating when militants are committing a terror act. We are condemning and have been condemning that. In view of involvement of Pakistani establishment, we are demanding a dialogue to ask them to stop it. This is the duty of government of India. They have been talking and they must talk also even now,” he said.

The CPI(M) leader said all the parties in the PAGD have been condemning in strongest terms the acts of terror attacks. “If you go through the history records, you will see how many ministers and legislators of National Conference and others were killed over the years. There is no ambiguity among the statements of the leaders and (PDP president) Mehbooba is being misunderstood.”

On the scheduled meeting of delimitation commission with its associate members from J-K -- three parliamentarians from National Conference and two from BJP -- in New Delhi on December 20, Tarigami said his party has challenged the J-K Reorganization Act in the supreme court and do not want anything happening under the union territory status.

“We want restoration of statehood. Nevertheless we met the delimitation commission (during its visit to J-K). They addressed our concerns and assured to prepare a note for circulation for public scrutiny. How many months passed but there is no note till date,” he said. “It is mandatory and not a favour for them to issue their report for public scrutiny.”

He requested the Lt Governor administration to empower panchayati raj institutions as promised and said, “It is better to water the sapling which you have planted before it is too late as the elected members have rendered powerless with no officer paying heed to them.”

Tarigami also criticised the administration for its ongoing drive to retrieve the Roshni land. “The land is under possession of the people for generations while a review petition of the government is pending before the Supreme Court. “The government must shun the strong policy tactics as ordinary people are finding themselves at the receiving end,” he said. He also criticised the administration for its “failure” to provide jobs to the youth.