The new Indonesian President presents a narrative of hope and change that echoes the wild enthusiasm and energies unleashed by his American counterpart, amidst fears that he might meet the same fate 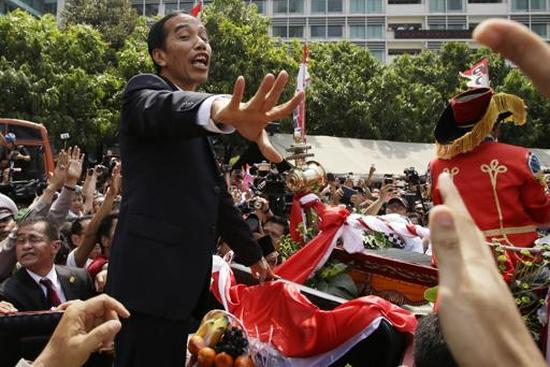 The rise of the recently inaugurated President of Indonesia, Joko Widodo, presents a narrative of hope and change that echoes the wild enthusiasm and energies unleashed when another President, Barack Obama, was first elected to his post in 2008. It is also a testament to how deeply democracy has become entrenched in the world’s most populous Muslim nation.

Yet, even as Jokowi, as Mr Widodo is universally known, begins his five year term, there are fears that his Presidency will come to resemble Obama’s in less salubrious ways as well. Like Obama, the new Indonesian President faces a powerful and obstructionist opposition that may well result in policy gridlock.

Jokowi is an unlikely leader for the world’s third largest democracy. The quintessential outsider, his path to electoral success sidestepped the usual road to political ascent. The son of a humble carpenter, Jokowi was a furniture maker and exporter, before he became mayor of Solo, a midsized city in central Java, in 2005. As mayor, he developed a reputation for mediation, patience and empathy with the average person on the street.

His most widely feted accomplishment was the relocation of street vendors away from a park in the city centre. This may not sound like the kind of feat that would secure Jokowi the Presidency in less than a decade. But what it revealed of his temperament, and preferred approach to tackling problems, is germane to explaining his later success.

The vendors had built up a squalid, semi-permanent market-place that caused major traffic snarls. All attempts at forcibly removing them had failed. Spurning heavy-handed tactics, Jokowi held over 55 informal meetings with the street sellers to find a mutually acceptable solution. This entailed moving them to an alternative location in exchange for financial incentives, as well as the establishment of public transportation links to the new venue.

Jokowi also instituted a special health card and educational schemes targeted at the poor. He campaigned against corruption, and refused to draw a government salary himself. Jokowi had won the 2005 poll with 37 percent of the vote. Five years later he was re-elected by Solo residents, with over 90 percent of the vote, the kind of result usually enjoyed only by dictators. But Jokowi won for being an honest and hard working, man of the people; the anti-dictator.

In 2012, the then-mayor cut short his term to stand for, and win, elections to the post of Jakarta governor. He chose Basuki Tjahja Purnama, an ethnic-Chinese Christian, as his running mate for the Jakarta ballot, a move that underscored his commitment to a secular and pluralistic vision of Indonesia.

In Jakarta, the governor quickly became known for his almost-daily practice of “blusukan" or surprise snap inspections of city officials. Rather than ruling from behind the high-walls of privilege Jokowi spent his days visiting local markets and slum areas to take in conditions first-hand. The slightly built, self-confessed heavy metal fan also showed up unannounced at rock concerts, and participated in popular city events like marathons.

As in Solo, he instituted healthcare schemes and educational projects for the poor. He also set about trying to rehaul Jakarta’s infamously inefficient public transport system. In these attempts, Jokowi met with only limited success.

Yet, the enormous public support he enjoyed persuaded, an initially reluctant, Megawati Sukarnoputri, to nominate Jokowi as her party’s candidate for this year’s Presidential election. Megawati is the leader of the PDI-P party, and the daughter of independent Indonesia’s founding father, Sukarno.

At the polls Jokowi faced a formidable rival in Prabowo Subianto, a former son-in-law of military dictator Suharto. He eventually won the closely fought election, with 57 percent of the vote. But the challenge facing Jokowi is that Prabowo’s political coalition forms the majority in Parliament, putting his opponents in the legislative driving seat.

To complicate matters further, the Indonesian President’s authority remains weak even within his own party. Megawati controls the party machinery, which significantly reduces Jokowi’s leeway for independent manoeuvre. This week’s cabinet announcement reflected the political horse-trading that Jokowi was forced into, despite his stated intention to eschew political appointees. Megawati’s daughter Puan Maharani was, for example, named a coordinating minister.

The road ahead will undoubtedly be a rocky one for Indonesia’s new President, as he tries to rein in corruption, fix the country’s creaking infrastructure, undertake difficult reforms such as the slashing of an expensive fuel subsidy, and keep the peace between the nation’s diverse religious and ethnic communities. It is possible Indonesia’s Obama may have no more success in his attempts than his American counterpart has managed thus far.

Nonetheless, the symbolism of Jokowi’s election is significant. The political narratives of most countries in the region are afflicted by the same unappetising cast of characters: dynastic heirs, military strongmen, corporate tycoons and religious hardliners. Jokowi has broken this mould, and by electing him Indonesians have affirmed the possibility of renewal via the democratic process even in a large and poor country.