Noting that roads are now being built at twice the speed as before, the Lt Governor said there has been a radical change in its progress under Pradhan Mantri Gram Sadak Yojana. 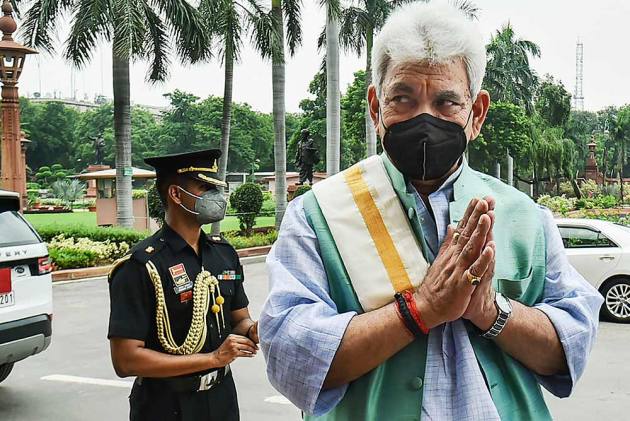 After the abrogartion of Article 370 due to the “dynamic leadership” of Prime Minister Narendra Modi , the infrastructure development in Jammu and Kashmir got a big push said Lt Governor Manoj Sinha said on Wednesday.

Sinha was speaking at a function where Union Minister of Road Transport and Highways Nitin Gadkari laid the foundation stone of 25 National Highway projects worth Rs 11,721 crore in Jammu and Kashmir. “After 2014 and especially after the abrogation of Article 370, the execution of new roads, tunnels and other basic Infrastructure has gained momentum to ensure the overall development of J&K under the dynamic leadership of Narendra Modi," Sinha said.

The LG noted that the speed of construction of new roads across Jammu and Kashmir has increased under the guidance of Gadkari. Noting that roads are now being built at twice the speed as before, the Lt Governor said there has been a radical change in its progress under Pradhan Mantri Gram Sadak Yojana. "Last year, 2,402 km of roads were constructed under PMGSY in Jammu division. Since August 2019, taking into account the figures of October 2021, 3,885 km of roads were built under PMGSY in Jammu division alone," he said.

As many as 109 projects have been completed in Jammu division at a cost of Rs 455 crore, including 14 bridges. Apart from this, nine bridges worth Rs 19 crores have been completed under various other schemes, he added. While counting the numerous projects under execution in Jammu and Kashmir being implemented by various executing agencies, the LG said these projects are important from not only tourism point of view but also for the economic growth and industrial development point of the area.

Underscoring that robust road network and modern transportation are key to economic growth, prosperity of region and transformation in every sphere of life, the LG said the foundations of Rs 11,721 crore National Highways projects, besides seven new projects will pave the way for sustainable development in Jammu and Kashmir. “The new mega road projects will open up new livelihood avenues for the local population and enhance tourism and business activities, besides strengthening the strategic grid by ensuring all weather connectivity,” the Lt Governor said.

Union minister Jitendra Singh also addressed the gathering and said the central government has framed a separate road map for the development of the Union Territory and to accelerate the developmental scenario, new bridges, roads, tunnels are being built on a war footing.