Infrastructure Gaps Need To Be Addressed Before They Leave Scar On Justice Administration: CJI

The CJI emphasised that adequate infrastructure remains a primary concern as without it the commitment to justice for all cannot be realised. 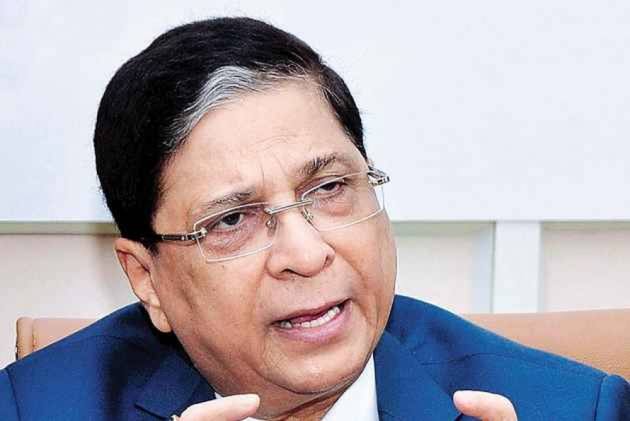 Infrastructure gaps in judicial system must be addressed at the earliest before it leaves scar on justice administration, and fiscal constraints must not be used as an excuse, Chief Justice Dipak Misra said on Saturday.

While delivering his lecture on the topic 'Technology, Training and Infrastructure: Key to Speedy Justice' and 'The changing face of legal education in India', organised by by the Supreme Court Advocates on Record Association (SCAORA), Justice Misra said strengthening of judiciary will result in qualitative and speedy justice.

"The infrastructure gaps shall not be allowed to multiply and should be addressed at the earliest opportunity before it leaves a deep scar on the administration of justice and it becomes too late to act wisely. Fiscal constraints is no excuse. The need is to strengthen the judiciary as a consequence of which the justice delivery system becomes fast, qualitatively responsive and serve the purpose of justice," he said.

The first half of Saturday was quite busy for the Chief Justice who in the morning had inaugurated the symposium on 'Role of legal education on nation building' in the event organised by Society of Indian Law Firms (SILF) and Menon Institute of Legal Advocacy Training (MILAT) as part of the 10th Law Teachers' Day award function.

Later, he attended the SCAORA conference which was inaugurated by President of India Ram Nath Kovind.

The CJI, in the SCAORA function, emphasised that adequate infrastructure remains a primary concern as without it the commitment to justice for all cannot be realised.

He said there was a need to widen the network of courts to increase the geographical reach of common man, to provide basic facilities to litigants and required facilities for the lawyers.

Justice Misra, while delivering his inaugural speech at the 10th Law Teachers' Day award function, said law schools are the hatcheries supplying legal professionals who act as sentinels for the implementation of rule of law.

"The implementation of rule of law in a nation depends on the quality of legal education in a country," he said.

The CJI also said legal education is a science which inculcates in law students a sense of maturity and understanding of the society and moulds them to emerge as protectors of citizenry liberties.

"Legal education is a science which imparts to law students not only the knowledge of certain legal provisions but it also inculcates a sense of maturity and understanding of the society which shapes and moulds them to emerge as protectors of citizenry liberties," Justice Misra said.

In both the functions, the Chief Justice appreciated the functioning of National Law Universities and said the institution has turned out to be the most successful exercise for enhancing the quality of legal education in the country.

"The introduction of five year law course has made legal education quite coveted in India. It has become imperative for law schools to take in account the changes taking place across the world as well as the contemporary issues in the society.

"Law schools must focus on developing amongst its students critical reflectiveness of the social, moral and political outlooks embedded in law," he said.

He released the e-journal of SCAORA and said it was the time that young lawyers, who are technically sound, should be allowed to argue in courts and old ones should leave the room for them.

He said technology has generated increased social awareness and made citizens more informed than earlier to claim their rightful entitlements and added that it can enhance quality of work by acting as an aid in expediting the routine cases.

He added that technological resources can aid in strengthening judicial data base.