Innocence Of The Guilty 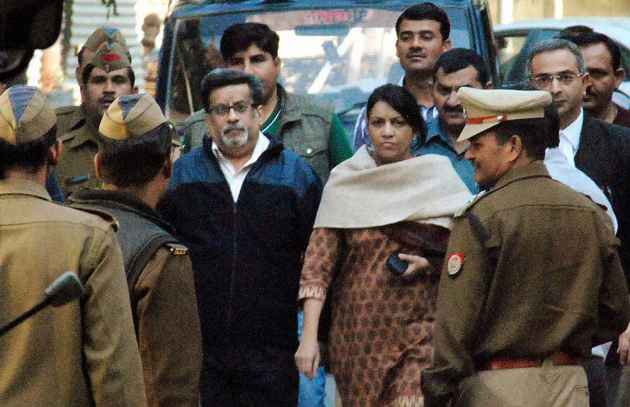 The trial court appears to have accepted the prosecution’s case that the 14-year old Aarushi and the Talwar family domestic help,  Hemraj,  were killed by her dentist father in a fit of anger to uphold the " family honour".

A caveat to start with. I do not know the Talwars and have followed the case closely only during the past few months. I met Dr Rajesh Talwar twice during this period with some questions. On both occasions he was busy attending to patients in his clinic but took time off to see me. He made no secret of his suspicion of the media and told me in as many words that he did not expect the media to be sympathetic.

I did not say this to him but I was more than inclined to believe in his innocence. As a ground level worker in my younger days for the Free Legal Aid Committee (FLAC), Jamshedpur and in the course of reporting and editing for newspapers later, I had observed many occasions of justice getting derailed. Miscarriage of justice, I posted on my Facebook wall last week, was the norm in this country, not an exception. And I recalled my colleague ( in TOI Lucknow) Mohit Dubey’s visit to the Lucknow Model Jail to speak to life- convicts who were being released after spending 14 to 16 years in prison. They were all convicted for murder and had been sentenced for life. But good conduct had earned them the remission after spending the best years of their lives in jail.

It was actually an invitation from the superintendent of the prison. He had invited Anoop Jalota to sing bhajans in the evening and the prisoners being released were being given small gifts before they left the next morning. Could we send a photographer? We insisted on sending a reporter as well, to which he readily agreed. One of the questions we wanted Mohit to ask the convicts was why they committed the crime in the first place and whether, after all these years, they regretted committing them.

Mohit returned crestfallen and reported that seven, of the nine convicts he had spoken to, had started crying when the questions were put to them. They had committed no crime, they insisted. They claimed to have been framed by family members, in-laws, hostile villagers, the police etc and also added that being poor they could not afford to hire lawyers or good lawyers. Some said they did not understand what was happening in the court and before they could realise anything, they had been convicted.

This is of course a familiar story and thousands of the poor continue to languish in our prisons despite being innocent. Talwars of course are educated, much better off and had access to reasonably good lawyers, who represented them at various stages of the trial. A small but influential group of intellectuals also batted for them in the social media. Patrick French wrote a very sympathetic account and a Facebook page sprang up in their defence. Legal luminaries like Harish Salve, Pinaki Misra and Mukul Rohatgi represented them without charging any fees. They have been luckier than most of the innocent languishing in our prisons.

Yet, they failed to prove their innocence. It can be interpreted as a triumph of our judicial system, under which even the most influential people cannot escape the long arm of the law. Talwars, both successful doctors and claiming some pedigree, were seen as a prosperous, “South Delhi” couple, enjoying the good life.

Their conviction could also be because the prosecution case was so strong that there was no room for any doubt and the evidence was loaded against them; or it could be because the defence team failed to point out the chinks in the prosecution’s story. There could be a third possibility that the trial court played safe and bought the prosecution’s story because that was the easiest course open to it. It also conformed to the popular mood, showed the independence of the judiciary, the majesty of the law and reassured the poor that they alone are not convicted in this country. A message has been sent out, an example set and the law has taken its course.

A ‘not guilty’ verdict would have led to the public outcry of a soft and lenient court, indulgent to the rich and the powerful. A ‘guilty’ verdict, on the other hand, gives the impression of a stern, upright court upholding a moral order in the universe. Few trial courts resist the temptation and even routine applications for bail are rejected as a matter of routine in the lower court.

During the last few days, however, I have often wondered whether it is a good idea to have “special CBI courts” to try cases investigated by the CBI. The number of such courts has gone up dramatically during the last few years and the justification is that they help the CBI in fast tracking trials and dispose pending cases. On the flip side, judicial magistrates, I would imagine, develop a cosy enough relationship with CBI lawyers, inspectors and investigating officers, who appear before the court in one case after the other. Dealing with only CBI cases, do these courts run the risk of believing that they are an extended arm of the CBI, created to uphold the prosecution’s case ? Could these special courts be more indulgent to the prosecutors and more lenient ? I have my doubts.

Suffice to say that I do not believe in the prosecution’s theory that this was an honour killing because Dr Talwar found his fourteen year old daughter in an  " objectionable but not compromising position" with Hemraj, the domestic help, to borrow the infamous phrase from the UP police officer who first came up with it.

Hemraj had joined the household eight months before the murder. He was the father-in-law of Talwars’ previous help’s brother and it was on his recommendation that Hemraj was appointed in his place. Hemraj was a grandfather himself and Talwars say he called their daughter Aarushi baby and seemed to be fond of her. They do not believe Hemraj could have been in a relationship with their daughter. Nor, for that matter, do Aarushi’s own friends and neighbours give any credence to the unfortunate insinuation. The CBI did interrogate both students and teachers of the school she went to and judging by the absence of even a squeak on her character in the court documents so far, it is safe to assume that the investigators drew a blank.

Aarushi was doing exceptionally well in school, took part in extracurricular activities, was attending a dance class and also had a boy friend. She was into parties, picnics, eating out and watching films and by all accounts, was enjoying her adolescence. She appears far from the stressed, unhappy and alienated child that the prosecution portrayed as justification for her alleged sexual ‘fling’.

Last week I spoke to her best friend’s mother. Aarushi had spent several hours of her last evening in their house. The two friends worked on a project and were their usual, giggling and excited selves. It was a shock, therefore, to be told next morning that Aarushi had been murdered.

It also remains a fact that the UP police lost the opportunity of collecting forensic evidence by not securing the crime scene. Everyone was allowed to walk through the flat after the murder was discovered. The dubious and unsubstantiated motive and the absence of forensic evidence would have normally led to the acquittal of parents and the court giving them the benefit of doubt. What could have led the court to hold otherwise?

On the face of it, the testimony of two doctors of the Uttar Pradesh Health Service did the Talwars in. One of them conducted the post-mortem examination of Aarushi’s body while the second doctor examined the body of Hemraj. In their reports they mentioned NAD ( No Abnormality Detected). They were also part of an expert medical team comprising doctors from AIIMS and yet reported nothing. But a year and a half later, in their statements to the CBI they claimed that the penis of Hemraj was swollen and Aarushi had an unusual dilation of vagina.

And although forensic examinations had not found any sperm in the genitals, the two doctors told the court that they believed Aarushi and Hemraj were engaged in a sexual activity. One of the doctors claimed that he had kept quiet because his findings were ‘subjective’ while the other doctor informed the court that though the body of Hemraj was exposed to the sun for a day and a half, was swollen and putrefied, his conclusion on his penis having swollen because of sexual stimulus was based not on medical jurisprudence but on his own, personal experience as a married man.

One has to wait for the trial court’s speaking order to see how water tight a case it was against the parents. But at this point I must confess feeling a overwhelming sadness. Despite evidence to the contrary, I have never been comfortable with the idea of parents killing their daughters. I would like to believe the Talwars are innocent.