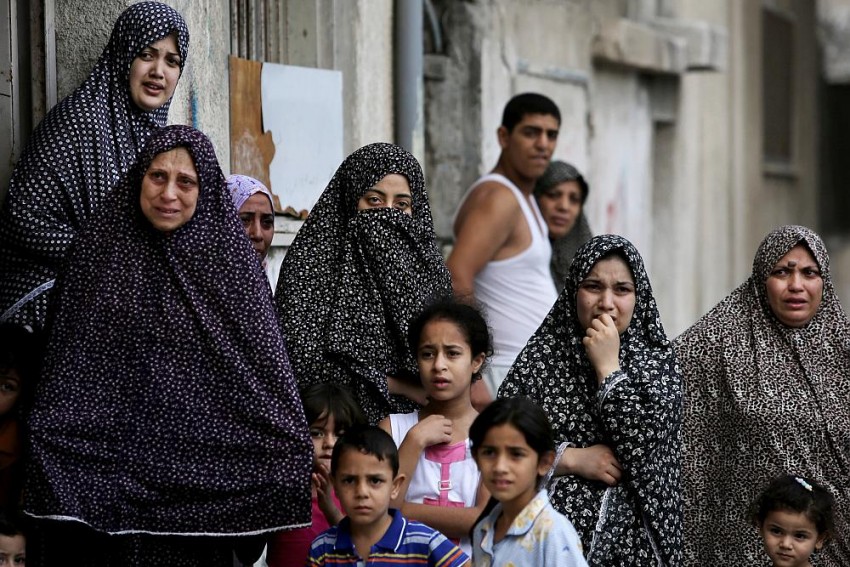 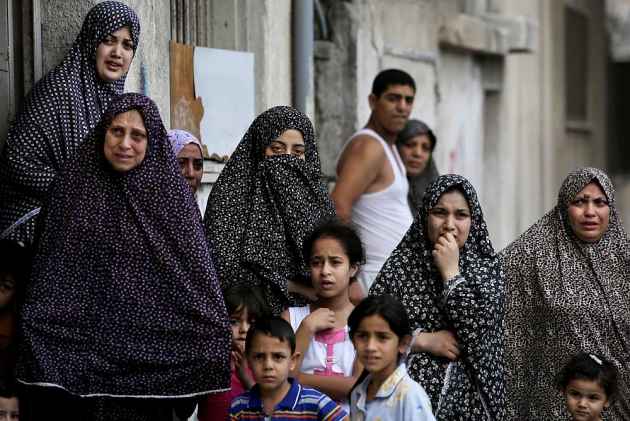 When the Bosnian Serb Army attacked in Srebrenica in 1995, they murdered all the men and older boys but not the women and children. The Army claimed that because they had not murdered innocent women and children, they were in compliance with international standards. Today, journalists who show any sympathy to the Palestinian cause tend to feature the awful casualty toll among “innocent women and children,” while the Israelis, defending their bombing, blame Hamas for women’s and children’s deaths. Political scientist Cynthia Enloe has referred to this common equation of “innocence” with women and children by coining the term “womenandchildren” as a single merged concept. This line of thinking and writing has been repeated over and over in reporting on the Israeli Gaza war. It is as if the greatest wrong done by the Israelis has been the “collateral damage” among womenandchildren.

The idea of innocence in this context has a long history, saturated with religious thinking. In religious terms those who are not innocent are sinners. In the secular terms of modern warfare, the non-innocent are combatants. Children are presumably innocent since they have not been alive long enough to become sinners, or because they are not yet fully formed and are not therefore responsible for their sins. But the case of children shows that the borders of innocence and guilt are fuzzy, because some children are combatants. Similarly with women, some of whom carry and use weapons. Moreover, the common sense ideology that women must be protected from violence is also full of holes: massive violence against women is commonplace in some wars, and women themselves are often suspected of seducing men, of collaborating with the enemy. But in this war, perhaps because of western stereotypes of Arabs and of Islam, the emphasis has been on women’s innocence.

This gendered version of the innocence-versus-guilt dichotomy makes no sense. Are men by definition not innocent? Many men are noncombatants—by choice, or because they are old or disabled. Many women are combatants, as they were in Vietnam and China and Cuba, and as they are in many places today. And what of those men and women who do not fight but support their side of the combat through manufacturing war materiel, feeding and clothing combatants, propagandizing or spying—are they more “innocent” than the men who face and use weapons of war? To take an American example, were the women who worked round the clock building warships in WWII more “innocent” then the men who were drafted?

The logic of “innocent children” is also problematic. Of course children need extra protection, but they need it because they are vulnerable and cannot usually protect themselves, not because they are more “innocent” than most adults. Laws set arbitrary ages of adulthood but many younger people have fought in regular or irregular armies. For years American boys could serve in the armed forces before they were deemed responsible enough to vote.

In the Israeli attacks on Gaza, the dangers of the “innocent womenandchildren” label works to obscure the real casualty toll for the Palestinians. With regard to men, the Israeli policy appears to follow a pattern recently made explicit by the US. In the Vietnam War, the US government treated every male death as that of a Communist soldier; in the drone warfare in Pakistan today, the US treats every dead male as a dead terrorist. As theNew York Times, hardly an opponent of the Obama administration, wrote, “Mr. Obama embraced a disputed method for counting civilian casualties that did little to box him in. It in effect counts all military-age males in a strike zone as combatants, according to several administration officials, unless there is explicit intelligence posthumously proving them innocent.” In the continuing and unresolved arguments about the number and distribution of the Gazan casualties, the Israelis lean toward the American logic: whenever possible, claim every male casualty as a Hamas terrorist. This means that only womenandchildren count as collateral damage; nothing a man can do can absolve him of guilt. By this reasoning, Israeli need apologize only for the deaths of womenandchildren; the men somehow deserve it.

Just as this line of thought holds that there can be no innocent men, so it labels all women as innocent. But that label, when attached to women, has derogatory meaning. It functions to exclude women from patriotism and citizenship, to deny them the status of political participants. Innocence also means ignorance and naivete about worldly matters, so the label denies women the respect that their knowledge and experience should command. Beside the facts that some women do fight, and that many work to support their struggle, the innocence label depoliticizes them. “Womanly innocence” has often been a reason to exclude women from discussions of politics, sex, or money. Men’s alleged duty not to pollute women’s innocence functions to preserve the male monopoly on political power. If that is what innocence means, most women would emphatically reject the label as insulting and belittling.

When we combine this male/female logic with racial logic, we get something even more noxious. The womenandchildren usage implies, as Maya Mikdashi recently wrote, that the Palestinian men, and more generally Arab men, are by definition non-innocent—and dangerous. This racism is a fundamental part of treating boys as men, denying their innocence. African American and Latina/o parents in the US often live in fear of how the police will treat their adolescent boys. A recent sociological study showed that in the US, African American boys are regularly perceived as older than white boys are, thereby making the black kids more responsible for their behaviors. In Palestine, Israeli soldiers regularly treat boys as grown men. The first Palestinian intifada against the Israeli occupation involved thousands of young boys (and no doubt some girls) throwing stones at Israeli soldiers. They were not always recognized as children, however, in the Israeli response. In other words, the very notion of who counts as a “child” is imbued with racial hostility.

Talk of innocent womenandchildren, furthermore, obscures the larger toll of this war. In arguments about proportionality, for example, is it only the allegedly “innocent” womenandchildren that the world should protest? Should we not focus rather on the overall casualties? Moreover, womenandchildren never live at a remove from the grown men in their communities, and they cannot be protected by rounding them up and placing them in shelters; they live in families and, like all societies, live interdependently.

Finally, the talk of innocent womenandchildren as casualties distracts attention from the damage done by the occupation itself. Everyone in Gaza is a casualty—of lack of decent food, hygiene, water, land, recreation, rest, all kinds of deprivation; and above all everyone in Gaza suffers from fear and from imprisonment. This chorus of hand-wringing about the death and suffering of womenandchildren does women and children no favour.

Linda Gordon is Professor of History at New York University and Distinguished Professor Emeritus at the University of Wisconsin. This article was first published by telesur English. Courtesy: Znet

ISIS: Made By USA