Inside Story Of Modi’s Suit Sale

Celebrities can raise stakes to sell suits but a feather-light fabric often betrays a deadly design. 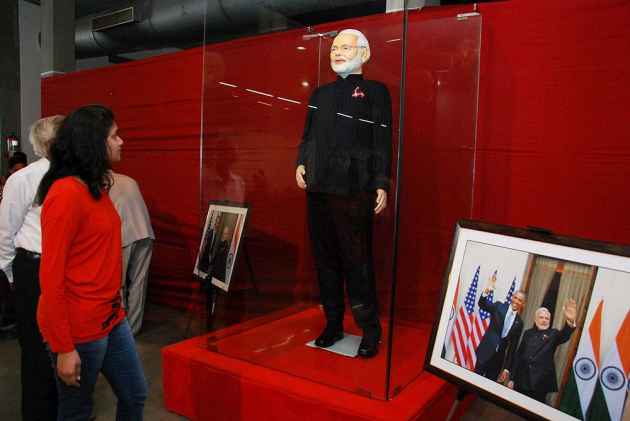 Prime Minister Narendra Modi’s pacesetter pinstripe suit may have fetched palpitation-inducing Rs 4.31crore – and it might help cleanse the sinfully polluted River Ganges, as is projected. But, those who watched the exercise undertaken to the drumbeats and cymbal sounds over three days in Surat -- the commercial capital of Gujarat --know for sure it was a fixed match.

The suit that cost the BJP the Delhi gaddi, and Modi his sheen was put under the hammer in a desperate bid to reclaim the remnants of a tattered ego. Put up along with 400 other gifts received by Modi after taking over as PM, the suit remained the focal point of attraction.

In the fray were textile magnates and diamond merchants and even a school teacher. Was it a mere coincidence that many of these who went around with cheque in hand had figured in income-tax raids and records? “I have been absolved,” said one under media questioning, while the other claimed no misdemeanor was proven.

Nursery school teacher Rajesh Maheshwari who offered Rs 1.25 crore claimed to have stitched the bid through a collection of Rs 50,000 from 250 people! The coming events were being talked about in media persons’ ‘whatsApp’ groups in Gujarat much in advance. That a Rs 5-crore target had been fixed in deference to instructions ‘from above’ was known. Gujarati daily Divya Bhaskar carried a pictorial report by its Surat correspondent showing undated but signed cheques with amounts filled in, collected in advance by district administration officials.

Correspondents covering the event spoke of CR Patil, the Surat-based BJP MP from Navsari, lurking in the background. A once penalised policeman, Patil had worked his way first to former Union textiles minister Kashiram Rana and then into the good books of Modi. His are the unseen hands that move mountains in Surat, the diamond capital of India, where limited year postings in the constabulary go for over Rs 25 lakh.

If the suit auction in Surat formed the core of an image salvage operation, the spanner in the works came from an officer of the Coast Guard picked up by the press in the same city. The officer claimed to have ordered that a Pakistani fishing vessel be blown up in the sea, debunking a government claim that it was a terror mission gone awry, whose target was the Gujarat coast on the eve of the Pravasiya Bhartiya Diwas and Vibrant Gujarat Global Investor Summit held in Gandhinagar.

Perception management is a key component of any brand building exercise. The truth of the fishing vessel explosion notwithstanding, old ghosts continue to haunt politics and politicos. The bulk of the alleged fake encounters in Gujarat took place to neutralize fidayeen terror outfits attempting to assassinate the then Gujarat chief minister. Almost all of them took place around the time Modi was facing a political challenge or crisis of sorts. The pattern persists even in the vessel affair. As a crisis erupted in Bihar and the BJP moved to fish in troubled waters, another distracting development unfolded in Delhi. It was the Modi government’s action against high profile corporate espionage. Another perception management operation at work? Likely.

The correctives have become necessary after the Delhi debacle. This one is seen by some as an attempt at neutralizing the overly corporate-friendly image the Modi government has vis-a-vis the Ambanis, the Adanis and the like. The two action-packed events had media riveted, taking the spotlight away from other, pressing issues.