The CCTV video, which was first posted by on YouTube by CGTN, shows the boy unzipping his pants and peeing on the buttons of the elevator. After a few seconds, he gets stuck in the moving elevator. 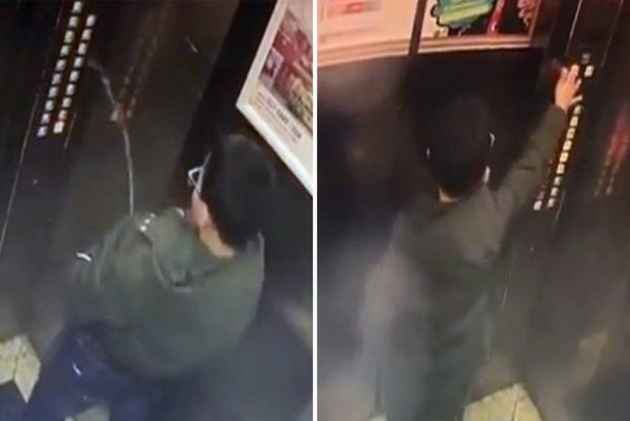 A bizarre video in which a boy is seen peeing in a moving elevator and getting stuck in it in southwest China’s Chongqing city has gone viral on social media.
The CCTV video, which was first posted by on YouTube by CGTN, shows the boy unzipping his pants and peeing on the buttons of the elevator. After a few seconds, he gets stuck in the moving elevator.
Standing alone inside the elevator, he then starts pressing all buttons and starts to panic. Moments after that the lights in the elevator go on and off and then, the boy is left in darkness. Many on social media called the act as "instant karma!".
The boy was rescued from the lift by maintenance staff. Global Times reported the building management confronted the boy and his father, and the pair reportedly denied any wrongdoing.
Several users said the child got what he deserved and suggested the parents should pay for the elevator repairs.

Boy peeing on elevator buttons gets dose of 'instant karma' when it short circuits and fills with smoke - https://t.co/Wu25F7TdL3 https://t.co/HCCb5LRhvd

This is what you get when you pee in an elevator, kid. LOL #Karma https://t.co/RuXTrS50yG pic.twitter.com/4d8X3A1eEc

“I am satisfied with the outcome! The guardian should compensate for the elevator,” one user wrote in a comment that had more than 11,000 likes.
Others, however, expressed their concerns for the young boy and criticised his parents for failing to discipline him.
“The child needs to be taught a lesson, the father too. Look at their parents’ response. His family is disgusting,” one user wrote.
Another added: “Behind a naughty child there are definitely naughty parents.”
According to the Beijing News, the boy’s father denied the validity of the video and defended his son’s actions.
“[The father] says that his son cannot yet urinate that high, he doesn’t believe it, and his son won’t admit it, says he didn’t do it,” a reporter told Newsweek.
BBC reported that Chinese state media are using the video to reinforce better parental controls.
The ministry of public security has shared footage on the popular Sina Weibo microblog, saying: "Please educate, and take good care of your children!"