He also said he is not emphasizing on the fact that attacks like Uri cannot happen again, but added that they (the armed forces) need to be prepared and alert. 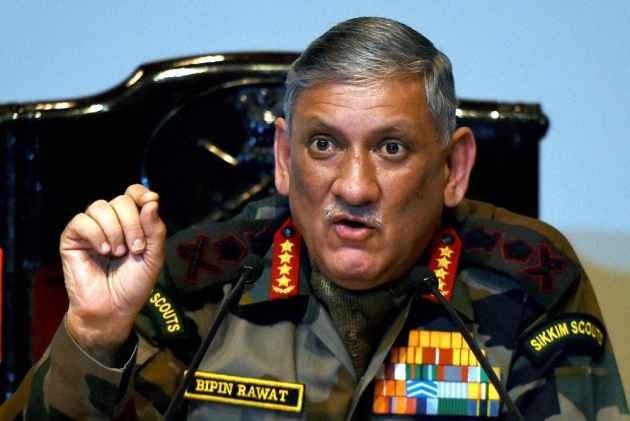 Chief of Army Staff General Bipin Rawat on Wednesday said the appointment of an interlocutor for Kashmir will not have an impact on army operations.

"Government has given Dineshwar Sharma the task of an interlocutor so we need to give him time to see how he will work," said General Rawat at a FICCI seminar.

General Rawat asserted that this is the army's first reaction to the use of the appointment of an interlocutor.

Speaking about the situation in Kashmir, General Rawat said that according to him, it is improving.

"Infiltration has decreased since we have gunned down terrorists at the border and the policy of the government regarding Kashmir has worked," he added.

He also said he is not emphasizing on the fact that attacks like Uri cannot happen again, but added that they (the armed forces) need to be prepared and alert.

"We are also looking at Electronic Warfare (EW) system to keep an eye not just on borders but in hinterland also. Security of installations in the hinterland is becoming a cause of concern. We are getting reports of Uri like attacks well in depth," he said.

Speaking about the FICCI seminar, General Rawat asserted that the seminar that they are attending is focusing at indigenisation.

"We have given out last year two compendiums highlighting the problem statements of the armed forces, particularly the army. This is a seminar where we are interacting with the industry to see how we can move forward," he said.

General Rawat also said that their major requirement as of now is intelligence, surveillance and reconnaissance (ISR).

"Our purpose is to discuss it with the industries on how we can make this process move forward and how best we can indigenise equipments to assistance whether for surveillance or war fighting," he added.

On Tuesday, Union Home Minister Rajnath Singh said decisions regarding Jammu and Kashmir would be taken by interlocutor Dineshwar Sharma.

"Dineshwar Sharma is appointed as the Government of India's special representative in Jammu and Kashmir, now what has to be done and how, it will be his decision," he told media. (ANI)