In the wake of monsoon rains and water-logging, 15,111 medical camps have been set up in Greater Chennai Corporation localities in which over 4,88,000 people have participated. 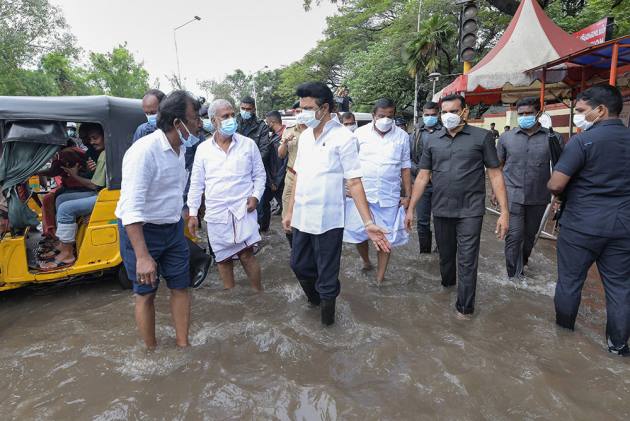 Inundation caused by monsoon rains continued to trouble people here and in other parts of the state, while Chief Minister M K Stalin on Tuesday inspected rain battered areas and distributed assistance to the affected people.

Despite ongoing work by authorities to bail out flood water using pumps, a section of city and suburban subways continued to be shut for traffic resulting in traffic diversions. Many roads and interior localities continued to be covered under sheets of water putting residents and road users into trouble. Vehicles moved at snail's pace in many areas like the Ashok Nagar-Postal Colony point, that are prone to flooding during every monsoon season.

The rains have led to damage to many roads and craters covered under water often caught motorists off guard. Authorities said repair work to damaged portions of the road is going on.
Of the 561 water-logged locations here, water has been drained in 227 and work is on to bail out water from the remaining areas using high-powered motor pumps, authorities said.

In the wake of monsoon rains and water-logging, 15,111 medical camps have been set up in Greater Chennai Corporation localities in which over 4,88,000 people have participated.
Suburban Peerkankaranai, Perumbakkam, Semmancherry and areas off Urapakkam and Mudichur like Vardadharajapuram and parts of city localities including Pattalam were among the areas that were badly hit. Water entered a section of houses in such areas and people were evacuated by authorities.

Though most city and suburban localities came under sheets of water due to continuous rains for days together, flood water began receding, albeit slowly, as rainfall ceased here and in other northern regions and sun shone brightly on Tuesday. The Cooum River embankment here was strengthened by placing about 500 sand bags in view of increase in outflow. Surplus water was being let out from reservoirs here and similarly, other districts like Cuddalore too released excess from waterbodies like the Veernam lake.

The five key dams that cater to the drinking water needs of Chennai have either touched 100 per cent storage like Kannankottai Thervoy Kandigai or close to full level, such as the Poondi.
The Mordhana and Rajathoppu reservoirs in nearby Vellore district too have touched full levels and surplus water is being discharged.

Public Works Minister E V Velu inspected the collapsed portion of Palar River bridge (linking Virinjipuram and Kothamangalam regions in Vellore District) in view of heavy inflows in the river. Surplus water release, in addition to rains, in Chengelpet and Kancheepuram districts as well, have led to inundation affecting people and routine of people in such areas. Of the total 14,138 lakes in Tamil Nadu, 8,075 have touched the full capacity, an official release said.

Surplus water is being discharged to ensure storage at safe levels in dams and only after cautioning people well in advance, the release added. Over 22,000 people from 19 districts including Chennai, Chengelpet, Tiruvallur, Kanchipuram, Villupuram, Cuddalore, Nagapattinam and Mayiladuthurai have been housed in 270 plus relief centres.

The Chief Minister interacted with the local people, listened to their needs and distributed flood relief, which includes blankets and essential commodities to the affected people.
He inspected the nearby Karappakkam lake that brimmed with flood water and discussed with officials on steps being taken to prevent flooding.

Following his Sunday visit to an inundated residential neighbourhood, Goodwill Nagar in Chengelpet district, the stagnant water was completely drained using heavy duty motors.
Stalin spoke to people of that locality on Tuesday. They thanked him for the quick action, a government release said.