The gentle giant from Multan celebrates his 100th Test appearance with an unbeaten 184, becoming only the fifth batsmen in Test history to record the feat. Also piling on the misery for the hosts is Inzamam's deputy Younis Khan on 127 as the duo stit Inzamam-ul Haq celebrated his centenary Test with a grand hundred as Pakistan compiled a strong total in their bid for a series-levelling victory against India in the third and final Test today.

Inzamam slammed an unbeaten 184 to help Pakistan reach a commanding 323 for two on the opening day of the decider at the Chinnaswamy stadium.

The 35-year-old burly batsman, only the fourth Pakistani to play in 100 or more Tests, became the fifth player ever to register a century in the milestone match.

Lending him solid support was his deputy Younis Khan with a back-to-back hundred of his own and by stumps was unbeaten on 127. 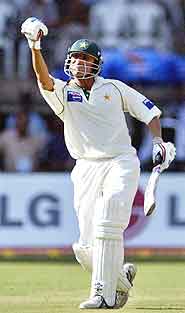 It was a day of run glut as the duo built up a mammoth third-wicket stand of 316 runs from 524 balls.

The loss of two openers inside the third over at the start turned out to be a mere blip on the radar. And once the floodgates opened, the Indians were swept away by the run deluge.

The Indian bowling lacked penetration, and on a slow wicket, posed little problems for Inzamam who was in imperious form.

Harbhajan Singh, under the ICC microscope after being reported during the second Test, looked an ordinary bowler. Anil Kumble was repeatedly smashed all over the park, the dead track taking the sting out of his top spinners.

The triple century partnership helped Pakistan shrug off early setbacks when their openers were back in the pavilion with only seven runs on the board.

The team was struggling in the third over after losing the wickets of Shahid Afridi (0) and Yasir Hameed (6) before the marathon partnership guided them out of the woods.

Inzamam has so far faced 263 balls and struck 25 boundaries during his 357 minute stay at the crease while Younis had consumed 361 minutes for his 267-ball knock which contained 12 fours and a six.

The duo created a new record for any partnership at Bangalore, surpassing the 207-run stand between Gordon Greenidge and Clive Lloyd achieved here in the 1974-75 series.

Inzamam's 21st career century meant the man from Multan joined a select band of players who have registered century on their 100th appearance.

Colin Cowdrey (England), Gordon Greenidge (WI), Javed Miandad (Pak) and Alec Stewart (Eng) were the other players to have accomplished the feat before.

Inzamam, winning the toss for the first time in six Tests, elected to bat on a slow track but the Indians were on top when they had both the openers back in the pavilion inside the third over.

Afridi was out for a first ball duck when he edged Lakshmipathy Balaji to Rahul Dravid at first slip in the second over.

Irfan Pathan consumed Yasir Hameed (6) when the right hander flashed outside off stump for a simple catch to wicketkeeper Dinesh Kaarthick.

Inzamam and Younis then put on a strong partnership for the third wicket to deny any more success to the home team.

Inzamam was in imperious form. With the ball slow in coming off the pitch, the Pakistani captain had all the time in the world to play his shots.

Pathan and Balaji posed little problems but the slow bowlers were the most to suffer.

Both Kumble and Harbhajan erred in length and Inzamam dismissed them contemptuously.

Inzamam reached his fifty with a four off Harbhajan to long off. It was his 39th career half century and fifth against India.

After the lunch break, the pair stepped up the run rate. Younis reached his half-century with a smashing boundary of Pathan.

When they added 135 runs together, they broke the record for the third wicket partnership at Bangalore that stood in the name of Javed Miandad and Mudassar Nazar (1979-80).