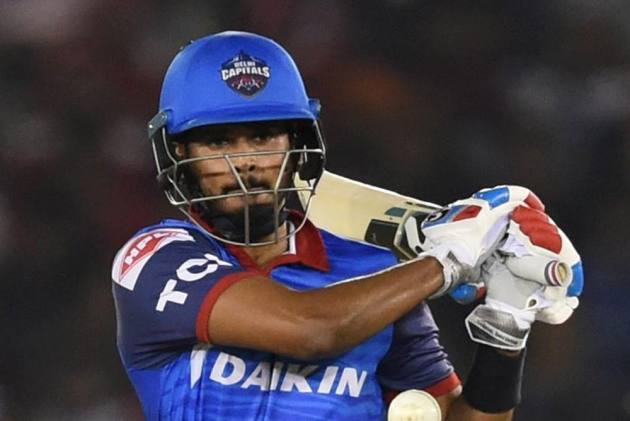 Another last over finish involving Delhi Capitals (DC) in the Indian Premier League (IPL). This time, they are the victors, against Kings XI Punjab. Sixth win from 10 matches. And anchoring the chase was skipper Shreyas Iyer.

Delhi thus avenged their shocking first-leg defeat in Mohali, and brightened their prospects of making the playoffs. Chasing 164 for a win, opener Shikhar Dhawan laid the foundation with a fluent 56 of 41 balls, then Iyer anchored the chase win an unbeaten 58 off 49 balls.

A batting collapse, like the one they have endured in Mohali, threatened to spoil the match, but Iyer played a captain's knock to avoid another debacle. In the first leg, DC lost seven wickets for eight runs to gift KXIP victory after sitting pretty at 144 for three in the 17th over while chasing 168.

Man of the match: Shreyas Iyer

11:52 PM IST: And Sam Curran's on. He was the hero when these two teams met in the reverse fixture, and in similar situations. A single to Shreyas Iyer. Five from five. Another single to Sherfane Rutherford, down the ground. Four from four. Iyer plays a lofted shot to extra cover and a double. Two from three. And the skipper hits the winnings runs, a four to deep mid-wicket. Delhi win by five wickets with two balls to spare.

11:46 PM IST: A single off the second ball of the penultimate over and 12th fifty for Shreyas Iyer. He takes 45 balls. Next ball, Mohammed Shami castles Colin Ingram's wickets. Ingram made 19 off nine. FoW-155/4 (18.3 Over). Yorked. Axar Patel is the new man. And he's run out. While going for the second run, Patel runs into Shami. Apologies from Shami, but there's nothing wrong in it. He wasn't blocking purposedly. FoW-156/5 (18.4 Over). Sherfane Rutherford is the new man. Four singles and two wickets from the over. DC-158/5. They need six from six.

110:20 PM IST: Good over for Delhi. Ten runs from Sam Curran's third over -- a wide, two fours and a single. Rishabh Pant hits the third ball for the first four, to fine leg, then Shreyas Iyer finishes off with another four, to third man. DC/128/2 after 15 overs. They need 36 from 30 balls.

11:08 PM IST: Another good over for Delhi. 10 runs from R Ashwin's third over, including a six, hit Shreyas Iyer off the first ball. Ashwin then tries to mankad Shikhar Dhawan off the third ball. DC-111/1 after 13 overs.

10:56 PM IST: Sam Curran returns for his second over. Five runs from the over, including a no-ball for height, Shikhar Dhawan. A double from the free-hit. DC-95/1 after 11 overs. Dhawan one run away from a fifty.

10:50 PM IST: Very busy over from Murugan Ashwin. The over started with a dot ball to Shikhar Dhawan, then two wides, followed by a single and a four, hit by Dhawan. Another wide and a double off the fifth ball. 10 runs from it. DC-90/1 after 10 overs. They need 74 runs from 60 balls.

10:46 PM IST: R Ashwin continues with his second over. Eight runs from the over, including a streaky four, courtesy a fine outside edge. DC-80/1 after nine overs. Delhi need 84 runs from 66 balls. Shikhar Dhawan and Shreyas Iyer have added 56 runs from 36 balls.

10:41 PM IST: Murugan Ashwin gets his first over. Five runs from it, including a bizarre no-ball free hit. The spinner slips the ball and it lands on the side of the pitch. Harsh call from the umpire. DC-72/1 after eight overs.

10:35 PM IST: Good response from Harpreet Brar. After conceding 17 from his first over, the pacer leaks seven runs -- five singles and a double. DC-67/1 after seven overs. They need 97 runs.

10:32 PM IST: Punjab skipper R Ashwin introduces himself into the attack. Shikhar Dhawan hits the first ball for a four, through mid-wicket. Eight runs from the over. DC-60/1 after six overs.

10:28 PM IST: First over for Harpreet Brar and 17 runs from it. The over started with a six over long-off, hit by Shikhar Dhawan. Then Shreyas Iyer hits two fours, off the third and sixth deliveries. DC-52/1 after five overs. They need another 112 runs from 90 balls.

10:23 PM IST: A fatal mix-up between Shikhar Dhawan and Prithvi Shaw resulting in the run out of the youngster. Mandeep Singh hits the target on the non-striker's end. FoW-24/1 (3.1 Over). Dhawan hits the next two balls for fours. New man Shreyas Iyer takes a single off the first ball he faced. Hardus Viljoen concedes 11 runs from his first over. DC-35/1 after four overs. They need 129 runs.

10:18 PM IST: A ducking Prithvi Shaw hits an outlandish six off the first ball of Mohammed Shami's second over. A well-directed bouncer forces Shaw to duck, but the opener manages to make enough contact and the ball sailed over fine leg boundary. Shikhar Dhawan hits the fifth ball for a four. 12 runs from the over. DC-24/0 after three overs. They need 140 runs.

10:13 PM IST: Sam Curran, the hero is the reverse fixture, shares the new ball with Mohammed Shami. 11 runs from the over, including two fours. DC-12/0 after two overs.

9:35 PM IST: Kagiso Rabada on with his third over. Seven runs from it. Three singles and a four, off the fifth ball. R Ashwin manufactures a shot to beat the fielder to cow corner. KXIP-141/6 after 18 overs.

9:18 PM IST: Sandeep Lamichhane completes his spell for figures of 3/40. It could have been four for him. But Kagiso Rabad dropped Mandeep Singh off the last ball at deep backward square. KXIP-118/5 after 15 overs.

9:08 PM IST: Twin strike from Sandeep Lamichhane. The Nepalese youngster returns for his third over. Chris Gayle hits the first ball for a six. But the spinner gets the big wicket of Chris Gayle next ball, thanks to a brilliant rally catch between Colin Ingram and Axara Patel. Ingram takes the catch at deep mid-wicket boundary but loses his footing, then he releases the ball for Patel. FoW-106/4 (12.2 Over. Gayle made 69 off 37 balls. Lamichhane then gets the wicket of the new man Sam Curran, caught and bowled, for a four-ball duck. FoW-106/5 (12.6 Over).  R Ashwin is the new man. Time out.

9:02 PM IST: Brilliant second over from Kagiso Rabada. Just three singles from it. KXIP-100/3 after 12 overs. They have added 34 runs in the last four overs.

8:52 PM IST: Ten runs from Axar Patel's second over, including a six off the first ball, hit by Mandeep Singh over extra cover. KXIP-92/3 after 10 overs.

8:48 PM IST: Fifty off 25 balls for Chris Gayle. Six fours and three sixes. The over starts with a six, over deep mid-wicket boundary. Then a single for Gayle's fifty. Amit Mishra drops short again, and another six over deep midwicket. 16 runs from the over. KXIP-82/3 after nine overs.

8:44 PM IST: Axar Patel strikes in his first over. David Miller, probably trying to match Chris Gayle, goes for a six but ends up offering a catch at deep midwicket, taken by Prithvi Shaw. FoW - 61/3 (7.1 Over). Mandeep Singh is the new man. Five singles from the over. KXIP-66/3 after eight overs.

8:39 PM IST: Veteran Amit Mishra into the attack, and Chris Gayle hits the last ball for a huge six over long-on. 11 runs from the over. KXIP-61/2 after seven runs.

8:32 PM IST: Ishant Sharma continues with his third over. Fours runs, thanks to a boundary hit by Chris Gayle off the fourth ball to the point. KXIP-50/2 after six overs. Time out.

8:26 PM IST: Kagiso Rabada strikes in his first over. Four dot balls and the wicket. Mayank Agarwal, in a bid to break the shackle, goes for a lofted shot and pays the price. Caught by Sherfane Rutherford at cover-point. FoW-42/2 (4.5 Over). He mad two off nine. But Chris Gayle continues to find the boundary. A four to end the over. KXIP-46/2 after five overs. David Miller is the new man.

8:22 PM IST: Chris Gayle's ripping the leg-spinner apart. Four fours from Sandeep Lamichhane's second over. 16 runs from the over. KXIP-42/1 after four overs. Gayle is already on 28 off 11.

8:18 PM IST: Ishant Sharma on with his second over and Chris Gayle is after him. A late cut for a four off the fourth ball, then a 101-metre long six over long on. 12 runs from it. KXIP-26/1 after three overs.

8:13 PM IST: Superb delivery from Sandeep Lamichhane to spin the ball away from KL Rahul, who's in fine form. 11 runs from the over. KXIP-14/1 after two overs. Mayank Agarwal is the new man.

8:10 PM IST: Sandeep Lamichhane on with the second over of the match. KL Rahul welcomes him with a six, over long-off. A dot then, the World Cup-bound player hits the third ball for a four, sweeping to square leg boundary. And a review for a stumping. Very quick work from Rishabh Pant. FoW-13/1 (1.4 Over). Rahul made 12 off nine.

7:40 PM IST: Delhi Capitals have won the toss and have opted to field first. Here are the playing XIs

7:35 PM IST: Meanwhile, Ajinkya Rahane has been sacked as Rajasthan Royals captain with Steve Smith returning to the helm once again. In another development, World Cup-bound Hardik Pandya and KL Rahul fined by the BCCI Ombudsman for their sexist comments in Koffee with Karan TV show.

7:30 PM IST: In the reverse fixture of this North India derby, Delhi conspired with themselves to lose from a winning position while chasing 166. They were comfortably placed at 144/3, then lost seven wickets for eight runs in a space of 17 balls with Sam Curran taking a hat-trick.

Seeking home comforts after multiple reverses at the Feroz Shah Kotla, Delhi Capitals will be desperate to buck the trend when they take on a rejuvenated Kings XI Punjab in a battle of equals. Both the teams have 10 points each from nine matches.

Delhi Capitals have been at ease on the road, winning three matches on the trot after an authoritative beginning in Mumbai. However, things have turned out quite differently in their home ground, where they found the pitches far from friendly. Shreyas Iyer and Co have only one win from their four home matches, the lone victory coming in the Super Over after the match against Kolkata Knight Riders ended in a tie.

Standing in their way are Kings XI Punjab. Ravichandran Ashwin's outfit will not be short on confidence, having easily beaten Rajasthan Royals three days ago. The likes of Chris Gayle, K L Rahul, David Miller and Mohammed Shami will look to capitalise on Delhi's miserable record at home, and with Ashwin leading from the front, it may not be an improbable task for the confident visiting team.