This will be the first visit to India by Rouhani after taking charge as the Iranian president in August 2013. 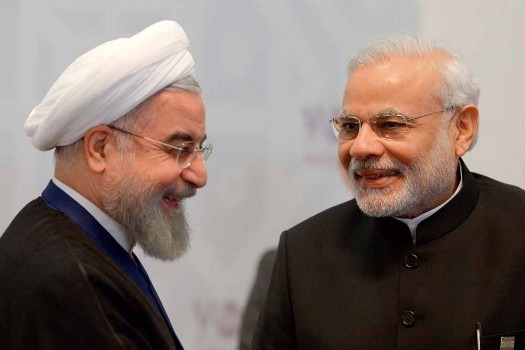 India and Iran will discuss regional and international issues of "mutual interest" during a three-day visit of Iranian president Hassan Rouhani starting tomorrow.

This will be the first visit to India by Rouhani after taking charge as the Iranian president in August 2013.

"During the forthcoming visit of the president of Iran, both sides would review the progress achieved in bilateral relations and also exchange views on regional and international issues of mutual interest," the ministry said in a release.

In New Delhi, apart from holding extensive talks with Modi and other Indian leaders on key bilateral and regional issues, the Iranian leader is also scheduled to deliver a special address at the Observer Research Foundation (ORF) on Saturday.

During the meetings, Rouhani and Indian leaders will discuss "the latest regional and global developments and the finalisation and exploitation of Chabahar port as soon as possible...," according to an Iranian media report ahead of the visit.

This "can be very effective for bilateral trade in the region and mutual access of Afghanistan to regional and international markets", it said.

During Modi's bilateral visit to Iran in 2016, nearly a dozen pacts were signed between the two countries.

The Trilateral Transit Agreement (Chabahar Agreement) was also signed by transport ministers of India, Iran and Afghanistan in the presence of Modi, Rouhani and Afghan President Ashraf Ghani.

The strategically important port will open up the transit route for India to Iran and Afghanistan, bypassing Pakistan.

India and Iran have robust economic and commercial ties covering many sectors though it has traditionally been dominated by the import of Iranian crude oil by India, which continued to engage with Iran at the time of sanctions.

According to the external affairs ministry, India-Iran bilateral trade during the fiscal year 2016-17 was USD 12.89 billion. India imported USD 10.5 billion worth of goods, mainly crude oil, and exported commodities worth USD 2.4 billion.

Rouhani will also address a congregation at the historic Mecca Masjid in Hyderabad after offering Friday prayers, official sources said, adding religious scholars from different schools of thoughts will also participate in this session.

He is also expected to visit historic sites here including Qutub Shahi tombs at Golconda, they said.

"This is the second time Rouhani will be visiting Hyderabad, and it is his first visit after assuming charge as the president. He will leave for New Delhi on February 16," the sources added.