One of the key cases influencing the debate on abortion in Ireland was that of Indian dentist Savita Halappanavar, who died of sepsis in a hospital in Galway after being denied an abortion during a protracted miscarriage in 2012. 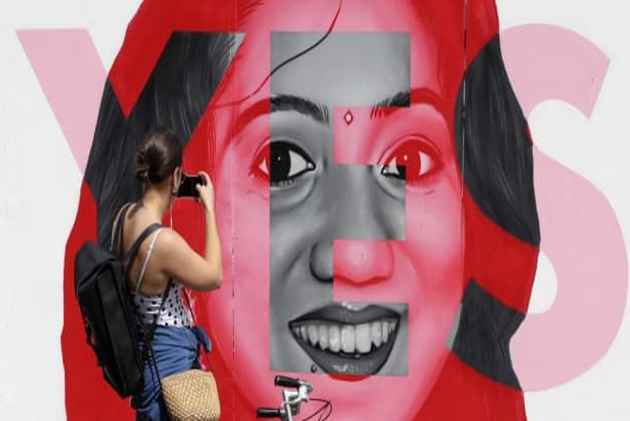 Ireland on Saturday voted overwhelmingly to overturn the abortion ban by 66.4%, a landslide victory for the yes vote to repeal the country's stringent abortion laws in a landmark referendum.

A referendum held resulted in a historic win for the repeal side. Currently, abortion is only allowed when a woman's life is at risk, but not in cases of rape, incest or fatal foetal abnormality, BBC reported.

The Eighth Amendment, which grants an equal right to life to the mother and unborn will be replaced.

One of the key cases influencing the debate on abortion in Ireland was that of Indian dentist Savita Halappanavar, who died of sepsis in a hospital in Galway after being denied an abortion during a protracted miscarriage in 2012.

Her husband Praveen had told her inquest she requested a termination but was refused because the baby's heart was still beating. A midwife manager at Galway University Hospital confirmed that she told Halappanavar that a termination could not be carried out because Ireland was a “Catholic country”. The inquest into her death returned a verdict of medical misadventure.

Her death had triggered a massive debate in the country over the issue of life-saving abortions and resulted in a new law that allows abortions under extreme circumstances. The Irish Parliament voted to legalise abortion in cases of medical emergencies as well as the risk of suicide in July, 2013.

Ireland's Indian-origin Prime Minister Leo Varadkar said the referendum result marked "the day Ireland stepped out from under the last of our shadows and into the light", The Independent reported.

It was "the day we came of age as a country" and "the day we took our place among the nations of the world".

"Today, we have a modern constitution for a modern people," he said.

Referencing the poet Maya Angelou's words that history "cannot be unlived" but "if faced with courage, need not be lived again", Varadkar said: "The wrenching pain of decades of mistreatment of Irish women cannot be unlived.

"However, today we have ensured that it does not have to be lived again."

A large crowd gathered in the courtyard of Dublin Castle, where the official result was announced, to celebrate the passing of the referendum. The only constituency to vote against repealing the Eighth Amendment was Donegal, with 51.9 per cent voting against the change.

A vote in favour of repeal paves the way for the Dáil (Irish Parliament) to legislate for change which would see the introduction of a much more liberal regime.

Ireland's Minister for Health Simon Harris, who was one of the leading political figures in the campaign, said the electorate had voted "Yes" after carefully considering all the issues.

“I think everybody is pleasantly surprised,” he said. The people of Ireland have said they “want to live in a country that treats women with compassion”.

While the two main parties of Ireland, Fine Gael and Fianna Fáil, did not take official positions on the referendum, politicians were permitted to campaign on a personal basis and Varadakar had been campaigning strongly in favour of a yes vote.

"It has been an honour to be on this journey with you and to work #togetherforyes… Thank you to everyone who voted today. Democracy in action,” he said in an online message on Friday.

Savethe8th, which led the no campaign, had effectively conceded defeat.

“What Irish voters did yesterday [Friday] is a tragedy of historic proportions. However, a wrong does not become right simply because a majority support it,” it said in a statement.

Thousands of Irish people living abroad flew home to cast their vote in the historic referendum. The #hometovote push online grew steadily for several days leading up to the vote. The hashtag filled up social as Irish citizens boarded planes in Buenos Aires, Bangkok, Tokyo, Sydney, Los Angeles, New York and from all across Europe and the UK.

Turnout in the referendum was on course to be one of the highest for a referendum in Ireland, topping the 61 per cent who voted in the plebiscite that backed same-sex marriage in the country 2015.

Penny Mordaunt, the UK's minister for women and equalities, welcomed the forecasted result. She tweeted: “Based on the exit poll, a historic & great day for Ireland, & a hopeful one for Northern Ireland. That hope must be met.”

Acknowledging an equal right to life for both the unborn child and the mother, the Eighth Amendment effectively prohibited termination in almost all cases, including rape, incest or fatal foetal abnormality.

The Catholic church had strongly opposed repealing the amendment and Irish bishops warned in a joint statement: “We believe that the deletion or amendment of this article can have no other effect than to expose unborn children to greater risk and that it would not bring about any benefit for the life or health of women in Ireland."