Is Nitish Kumar Warming Up To The BJP?

It would be premature to read too much into his support for NDA Presidential candidate Ramnath Kovind but as the Lalu family is facing trouble from the law, he is doing the smart thing to keep all options open. 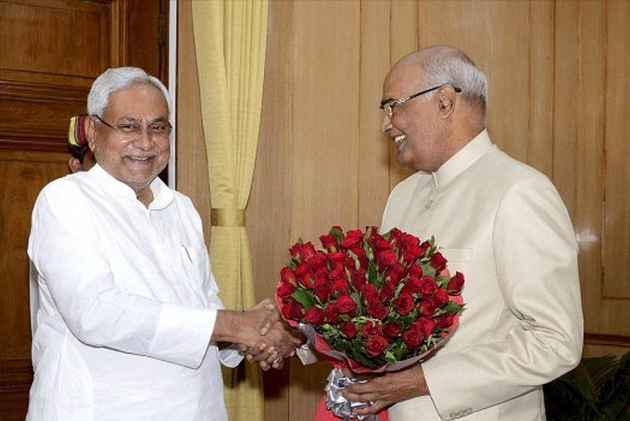 Nitish Kumar’s support to NDA’s Presidential candidate Ram Nath Kovind has once again triggered speculation around an old theme: is he warming up to the BJP? These theories have been periodically floating around, ever since the ‘mahagathbandhan’ romped to a thumping victory in the Bihar elections in October 2015.

Despite the huge victory of the coalition under Nitish Kumar, it didn’t escape anyone’s notice that Lalu Prasad Yadav’s Rashtriya Janata Dal (RJD) made the biggest gain in the election in terms of the number of seats. And some doubts about the coalition’s durability started getting expressed when Nitish had to yield to Lalu’s pressure to name his younger son Tejashwi Yadav as deputy CM.

As days and months passed, the government has been relatively stable and cohesive despite periodical rumblings. Even the prohibition policy has been smoothly handled without major incidents, despite the scepticism of all and sundry. So, what has changed in the recent months that set tongues wagging about Nitish cozying up to the BJP?

It was in June 2013, barely a week after the BJP named Narendra Modi as the chairman of the campaign committee, that Nitish’s JD(U) quit the NDA. The parting was bitter and despite reports of party chief Sharad Yadav wanting to wait out till the formal announcement of Modi as the prime ministerial candidate, Nitish prevailed upon him to go along with his decision. It also marked the beginning of Sharad’s marginalisation within his party as he also simultaneously had to quit the post of NDA convenor, a post he held since 2008.

Despite losing majority in the assembly, Nitish managed to win the vote of confidence with the support of Congress and subsequently went hammer and tongs at his erstwhile ally all through the 2014 election campaign. However, without an alliance, his party lost the plot entirely, ending with merely two seats out of the 40 it contested in Bihar.

The consummate politician that Nitish was, he swiftly resigned, taking the blame for the rout, and gave the CM’s chair to Jitan Ram Manjhi, a Mahadalit. Manjhi, however, refused to be a puppet and began to grow too big for his boots and defy the leadership. So he was summarily expelled and Nitish was back in the saddle in February 2015, this time with the backing of long-term rival and one-time colleague Lalu. The political wheel had turned. After the grand coalition of JD(U)-RJD-Congress earned its spectacular victory, Nitish was even talked about as a viable face around whom a seemingly listless opposition could coalesce in 2019 to take on Modi.

However, a slight thaw in the acrimonious relationship between the Prime Minister and Nitish was noticeable in the latter half of 2016. Starved of funds post prohibition, it was in Nitish’s interest to maintain a working relationship with the centre and his political nous was evident on more than one occasion.

After the much-hyped surgical strikes of September 29 last year, he didn’t waste a moment before congratulating the Modi and the army while most of the other opposition parties came up with a calibrated response. With demonetisation too, he bucked the trend and chose to strike a moral pose against black money.

On January 5, 2017, an event organised by the Bihar government to mark the 350th anniversary of Guru Gobind Singh saw Modi and Nitish heaping praises on each other. Apart from the visible camaraderie, the issue of seating Lalu in the VIP enclosure instead of the dais also created a controversy. This was followed by an invitation to state BJP leaders for a Makar Sankranti feast hosted by JD(U) state president Sanjay Singh on January 14.

In the background, efforts were on to replicate the mahagathbandhan idea in Uttar Pradesh, which was going to polls in February. But with the succession battle in the Yadav clan of Etawah taking centre stage, time was running out. After the Election Commission granted the cycle symbol to Akhikesh Yadav, the Congress and the Akhilesh faction of SP stitched up an alliance. The JD(U), a minor presence along the eastern parts of UP, was not in the mix. After announcing that it would contest in an alliance with the RLD in the entire state, it backed out to prevent the split of the secular vote.

On February 10, a day before the first phase of polling in UP, at a book launch of former home minister P. Chidambaram in Delhi, Nitish did a volte-face on demonetisation and even offered some friendly advice to Rahul Gandhi. “It is also not necessary to react to everything said by the BJP. Why allow it to set the agenda? Why not set the agenda?” Nitish was looking at Rahul when he said this.

Rahul was also a special guest at the centenary commemoration of the Champaran Satyagraha on April 17, an event graced by President Pranab Mukherjee among others. Despite confirming his participation, Home Minister Rajnath Singh gave it a miss, prompting jibes from Nitish and Laloo. Nitish also called on Sonia Gandhi three days later at 10, Janpath, where he reportedly discussed the presidential poll and the need for the opposition to unite.

A May Day event to mark the 95th birth anniversary of veteran socialist Madhu Limaye at the Constitution Club in Delhi, attended by this reporter, saw the Congress participate, breaking a tradition. Historian Irfan Habib was among the speakers. “Socialists and their inveterate opposition to the Congress led to a situation where right-wingers framed our Constitution, for the Socialists refused to be part of the Constituent Assembly,” he said. He was hinting that the time had come for Communists, Socialists and the Congress to bury their differences for a larger cause.

Around then, despite all efforts, consensus on a candidate for President was eluding the Opposition. Still it came as a surprise when Nitish skipped the lunch hosted by Sonia Gandhi on May 26 to zero in on a joint nominee—though he attended the lunch hosted by the Prime Minister at Hyderabad House next day to honour the Mauritius President. It was reported that he conferred with the Prime Minister after the event. Nitish played it down and asked the press to not read too much into it. He claimed it was already decided that Sharad Yadav would attend Sonia Gandhi’s lunch on JD(U)’s behalf.

The damage was slightly undone during the Opposition get-together on June 3, on the occasion of DMK patriarch Karunanidhi’s 94th birthday celebration, where Nitish was also in attendance along with Rahul Gandhi and Sitaram Yechuri among many others. A day before the Opposition meeting scheduled for June 14, Rahul took off on a vacation—10 core members of the 17-party Opposition grouping conferred, but no consensus emerged again. This was after the government overtures to the Opposition on an all-party consensus.

On Monday, June 19, Amit Shah unveiled Kovind, a virtual unknown, as the BJP/NDA candidate, catching the opposition by surprise. Nitish immediately let his opinion be known, barely short of endorsing him. Despite Ghulam Nabi Azad trying to talk Nitish out of supporting Kovind next evening at an Iftar thrown by the Bihar Congress, Nitish announced his endorsement of Kovind’s candidature after a hastily arranged cabinet meeting on Wednesday.

This marked him out as a politician way smarter than anyone else in the Opposition. They have already sought to embarrass Nitish by putting up former Lok Sabha Speaker Meira Kumar as their candidate but the tactician in Nitish Kumar would already have taken that into account before taking the decision.

Nitish realises it wouldn’t work to his advantage if he goes around targeting Modi without a positive agenda; something the Gandhi scion is yet to learn. It would be premature to read too much into his support for Kovind but as the Lalu family is facing trouble from the law, he is doing the smart thing to keep all options open. He knows his party has a low vote base (despite his popularity soaring among women in Bihar on the back of prohibition), and in a triangular contest, he would be nowhere close to winning.

Nitish’s political manoeuvres come from one who is obviously an ace at reading political situations. There’s a dire message there somewhere for the whole Opposition, in relation to 2019.