Is The General Not Involved?

Terrorism in J&K and elsewhere is suddenly up. Many argue that the hard-core fundamentalists are doing this to undermine Musharraf. Not necessarily. Wouldn't it suit him to overtly oppose and covertly support?

This may please be read in continuation of my earlier article titled, The Useful Vested Interest?

The situation in Jammu & Kashmir, which was showing definitive signs of normalisation since the coming into office of a new coalition government headed by Chief Minister Mufti Mohammad Sayeed in October last year, is again giving cause for concern, with a deterioration in the ground situation.

Amongst the positive signs of normalisation, one could cite the two successful visits by the Prime Minister, Shri Atal Bihari Vajpayee, to Srinagar since April, the visit by Smt. Sonia Gandhi, the leader of the opposition Congress (I), the remarkable revival of domestic tourism with over 100,000 tourists from other parts of India visiting the valley this summer and the uninterrupted flow of Hindu pilgrims.

During his first visit, the Prime Minister addressed a well-attended public meeting in Srinagar, the first by a Prime Minister in nearly a decade. His second visit was to preside over a meeting of the inter-State Council, which was attended by many Chief Ministers from the rest of India. Sonia Gandhi visited Srinagar to preside over a brain-storming session of her party leaders from all over India. The fact that all these meetings could be held without any major security problem spoke well of the improvement in the ground situation.

Amongst other positive signs were the revival of normal political activity with State leaders from different mainstream political parties undertaking tours of their constituencies for mass contact with the people and indications of the moderate elements in the Hurriyat Conference, being unhappy over the way pan-Islamic Pakistani Punjabi organisations, which are members of Osama bin Laden's International Islamic Front (IIF,) have hijacked the militant movement started by some indigenous Kashmiri elements in 1989, to achieve their own pan-Islamic objectives, which have nothing to do with the interests and objectives of the Kashmiris. 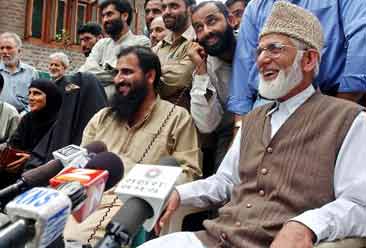 It was not as if violence had completely stopped in the valley during this period. Sporadic acts of terrorism continued to take place, with the focus on eliminating moderate elements such as Abdul Majeed Dar of the Hizbul Mujahideen (HM), who was reportedly unhappy with the way Syed Salauddin, the Pakistan-based Amir of the HM, was completely towing the line of Pakistan's Inter-Services Intelligence (ISI) and JEI led by Qazi Hussain Ahmed.

The Indian Prime Minister's continued insistence on the stoppage of Pakistan-sponsored cross-border terrorism before India could agree to talks with the military-civilian hotch-potch government in Islamabad and international, particularly US, understanding of the Indian stand and concerns over the continuing cross-border infiltration of terrorists from Pakistan have resulted in the ISI and the JEI, despite political differences over Pervez Musharraf's continuing to hold office as the Chief of the Army Staff (COAS) to which the JEI is opposed and over the validity of the constitutional amendments arbitrarily promulgated by him before the elections in Pakistan last year, joining hands in an attempt to re-kindle acts of terrorism in the valley.

Consequently, in recent weeks, more particularly since the Prime Minister's second visit to Srinagar last month, acts of terrorism have been stepped up in the valley and there are indications of a similar attempt to orchestrate acts of terrorism in Mumbai and other parts of India.

Amongst the organisations being used in this regard are the Lashkar-e-Toiba (LET), the Jaish-e-Mohammad (JEM) and the HM.The LET and the JEM, both Pakistani Punjabi organisations, have been responsible for most of the acts of terrorism, particularly suicide terrorism, in J&K and other parts of India since they joined the IIF after its formation by bin Laden in 1998.

The HM is the appendage of the JEI of Qazi Hussain Ahmed of Pakistan. The HM, whose leaders and their training camps were thrown out of Afghanistan by the Taliban after it captured Kabul in September,1996, because of its links with Gulbuddin Heckmatyar's Hizbe Islami (HI), which was then fighting against the Taliban, has recently joined hands with the dregs of the Taliban, Al Qaeda and the HI operating against the security forces of the Hamid Karzai Government in Afghanistan from sanctuaries in the North-West Frontier Province (NWFP) and Balochistan of Pakistan, with the complicity of serving and retired officers of the Pakistani Army and ISI.

At the same time,the HM has also joined hands with the LET and the JEM for stepping up acts of terrorism in Indian territory. A group of serving officers of the Pakistani Army and the ISI headed by Gen. Mohammed Aziz, a member of the Sudan tribe from Pakistan-Occupied Kashmir (POK), who is presently Chairman, Joint Chiefs of Staff Committee, and a group of retired officers headed by Lt.Gen. (retd) Hamid Gul, former Director-General of the ISI, have been guiding the operations of these pro-bin Laden groups in both Afghanistan and India.

It would be incorrect to view their activities as being undertaken without the knowledge or approval of Musharraf, who has been covertly approving their operations while ostensibly marking his distance from them. The remarks of Aziz, indirectly critical of Musharraf, while addressing a meeting at Rawalakot in POK, while Musharraf was away to the US for his Camp David summit with President Bush in June last, were made with his prior nod in order to create an impression that the activities of these groups in Afghanistan and India were without Musharraf's approval.

According to well-informed sources, Musharraf had invited about three months ago Dr. Pervez Hoodboy, a faculty member of the Department of Physics, Quaid-e-Azam University, Islamabad, and some other Pakistani intellectuals for a discussion on Kashmir. He reportedly told them: "If we completely shut down all training camps and assistance, the Kashmir issue will become cold beyond recovery".