Pillai was the father of Pranesh Pillai alias Javed Sheikh who was killed in the encounter along with Ishrat Jahan and two others in 2004. 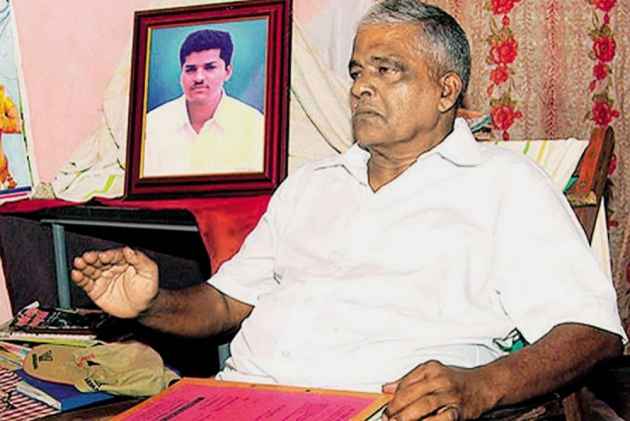 Gopinath Pillai, one of the petitioners in the case on Gujarat fake encounter that killed Ishrat Jahan, his son and 2 others, was killed in a road accident in Kerala on Thursday.

Pillai was the father of Pranesh Pillai alias Javed Sheikh who was killed in the encounter along with Ishrat Jahan and two others in 2004.

Pillai died after his car met with an accident on Alapuzzha highway after returning from a hospital health checkup, former wife of Pranesh Pillai told Outlook.

Pillai's brother was driving the car while he sat on the passenger seat, when it collided with a car. The car flipped as a result, and hit another car, causing a double impact.  Pillai, who was unconscious, and his brother were taken to the hospital. Pillai died soon later. The doctor cited multiple fractures and system failure as cause of his death. His brother is stable.

Pillai had been contesting the government and Gujarat police's claim that branded his son a terrorist.

Nineteen-year-old Mumbai-based girl Ishrat Jahan, Javed Shaikh alias Pranesh Pillai, Amjad Ali Rana and Zeeshan Johar were gunned down in an encounter by Gujarat police on 15 June, 2004 on the outskirts of the city. The police had then claimed that the four were Lashker-e-Taiba terrorists on a mission to assassinate then Gujarat Chief Minister Narendra Modi.

The SIT constituted by the Gujarat High Court had concluded that it was not a genuine encounter as the four were first abducted, held illegally and then murdered in cold blood.

Pillai had been recounting to the media the trauma he’s undergone since the cops killed his son, branding him a terrorist.  “ My son could never be a terrorist,” he had said. “Pranesh converted not out of love for Islam but because he thought there was no option if he wanted to marry the girl of his choice.”

In the first charge sheet filed by the CBI in 2013, seven Gujarat police officers were named as accused, including IPS officers P P Pandey, D G Vanzara and G L Singhal who are facing charges for kidnapping, murder and conspiracy.

Fighting for justice for his son and others for more than a decade, Pillai made some startling revelations to Outlook in 2016.“I remember a head constable telling me, ‘Just go with the statement that your son was a terrorist and there will be no trouble. If you don’t, we’ll catch a terrorist in Kashmir or somewhere and make him say your son was given a huge sum to eliminate Narendra Modi.’ All I can say is, I believe my son was trapped. His call records were examined and there was evidence he had talked to Vanzara for two minutes. When I went to collect his body,  one of his arms was hacked at the shoulder and hanging by the skin. They were poisoned and then shot,”

Read also- "Pranesh Was With Me In Kerala"

A special CBI court, last month, discharged retired Gujarat DGP PP Pandey in the case. In December last year, Pillai had opposed the discharge application.  "Pandey's discharge will obstruct the uncovering of the conspiracy to murder the present respondent's son and others, and will hinder the trial court from arriving at the true facts," the had said.

Pandey was the seniormost serving IPS officer when he was arrested in 2013 by the CBI in connection with the case. Special CBI judge JK Pandya granted relief to Pandey.