Sergio Cidoncha gave Jamshedpur the lead with a 35th-minute freekick before Manuel Lanzarote curled a corner directly into the net at the stroke of half-time to level the scores. 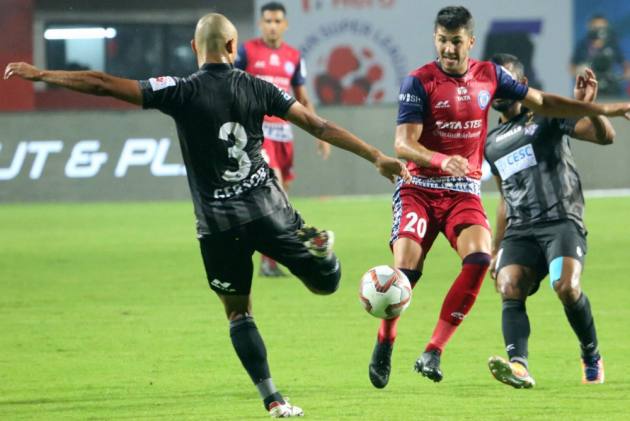 Sergio Cidoncha gave Jamshedpur the lead with a 35th-minute freekick before Manuel Lanzarote curled a corner directly into the net at the stroke of half-time to level the scores.

ATK's defence was called into action as early as the sixth minute when Gerson Vieira's headed clearance thwarted Cidoncha from getting his head to a Michael Soosairaj's cross.

The hosts were in control of the midfield with the ever-present Mario Arques and Memo working in tandem to nullify ATK's forays.

Soosairaj, meanwhile, was enjoying space down the left flank. His cross into the box allowed Cidoncha to send a volley at goal from close-range but the effort was straight at goalkeeper Arindam Bhattacharya, who managed to punch the ball away.

Cidoncha had another chance to score when a rebound fell in front of his feet after Soosairaj's effort was initially blocked. But ATK had plenty of bodies inside the box to keep out the forward's attempt.

The Spaniard finally gave Jamshedpur the lead in the 35th minute. Pronay Halder's foul on Cidoncha just outside the box allowed the forward to curl the resulting free-kick into the bottom right corner with goalkeeper Arindam at fault for not reading the bounce.

ATK equalised against the run of play on the stroke of half-time.

After the break, John Johnson and Gerson Vieira were required to hold firm as the hosts tried to find gaps in ATK's backline.

At the other end, a free-kick from the left by Lanzarote just after the hour mark managed to take the entire Jamshedpur backline out of the equation but the near-post delivery missed Johnson by a whisker.

A fantastic ball into the box by Mario Arques allowed Tim Cahill to sneak in behind ATK defence but the Australian's header fell safely into the hands of the goalkeeper.

Lanzarote's willingness to drop deep in midfield allowed ATK to hold on to the ball better as the second-half progressed.

Jamshedpur, who threatened from the flanks in the first half, were unable to maintain the same intensity after the restart.

Jamshedpur almost took the lead at the end when Carlos Calvo's cross was headed just over by Mario Arques.