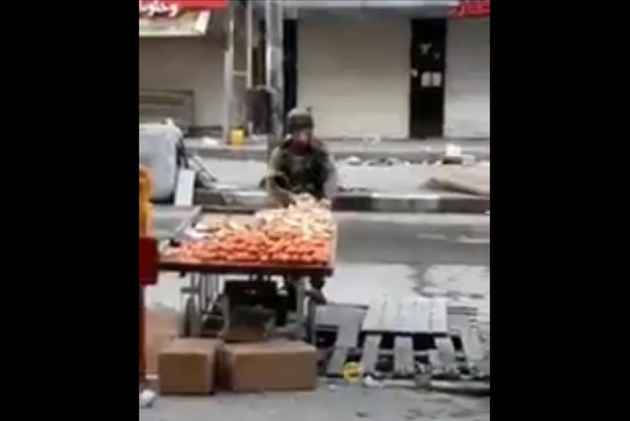 An Israeli Army commander has been suspended after a video of him went viral on social media where he was seen stealing apples from a Palestinian vendor's stand in the West Bank town of Hebron.

Soldiers from the Givati brigade in Hebron had been deployed in the area near Hebron’s market to deal with any disturbances following President Donald Trump's recognition of Jerusalem as Israel's capital.

The squad commander spotted a stand whose Palestinian vendor had left due to disturbances in the area, Haaretz reported.


In a video circulating on the internet, the commander, who apparently did not notice Palestinians filming him, is seen taking three apples from the stand and passing them out to the soldiers who were with him, the paper said.

A spokesman of the Israel Defense Force called the incident "conduct inconsistent with what is expected of an IDF soldier and commander."

The commander has been suspended from his position and will face disciplinary action, the paper quoted the spokesman as saying.

Over the weekend, at least 140 Palestinians were injured in clashes in East Jerusalem and the West Bank.