Video of Tuesday's attack released by an Israeli rights group showed several shirtless settlers with scarves wrapped around their faces hurling stones at a cluster of homes and vehicles. 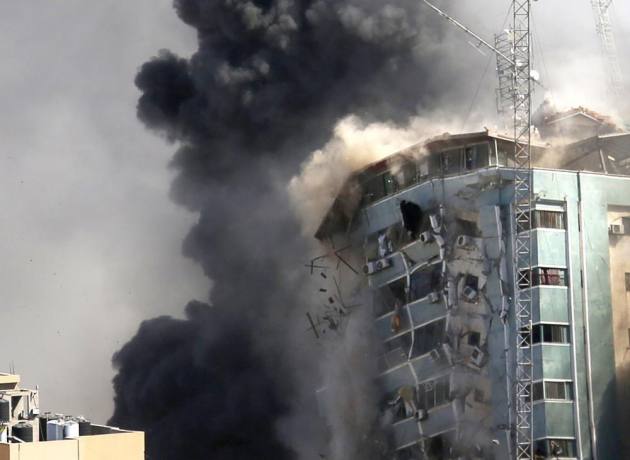 Video of Tuesday's attack released by an Israeli rights group showed several shirtless settlers with scarves wrapped around their faces hurling stones at a cluster of homes and vehicles.

Israeli troops stood among the settlers but did not appear to be taking any action to stop them.

The Israeli military declined to comment. Israeli police described it as a “friction incident” and said two Palestinians and a settler were arrested. It said people were wounded on both sides and that it is still investigating the incident after complaints were filed on Wednesday.

Sami Hureini, a local Palestinian activist, said a group of Israeli settlers attacked a Palestinian shepherd near the village of Mufaqara and slaughtered four of his sheep.

He said they then stormed the village itself, attacking residents with clubs and stones.

He said a four-year-old boy, Mohammed Bakr, was hospitalised with a head injury.

The Israeli human rights group B'Tselem released video of the attack and provided a similar account.

It said Israeli troops fired tear gas at Palestinian residents and arrested at least one Palestinian. An Israeli soldier can be seen throwing a tear gas grenade at the Palestinian who filmed the attack and then shoving him.

Nearly 500,000 Jewish settlers live in the occupied West Bank, which Israel seized in the 1967 war. The territory is home to more than 2.5 million Palestinians, and the Palestinians want it to form the main part of their future state.

In addition to more than 120 authorized settlements, more radical settlers have established dozens of outposts in rural parts of the West Bank. Israeli authorities are reluctant to dismantle them because doing so usually ignites clashes between the settlers and security forces.

The Palestinians and the international community consider all settlements to be illegal and an obstacle to peace.

B'Tselem said the settlers who took part in the attack came from two nearby outposts, Avigayil and Havat Maon. The area has seen a series of recent settler attacks.

B'Tselem and other rights groups say Israeli forces often turn a blind eye to settler violence or side with the settlers in clashes with Palestinians.

“What Palestinians endured yesterday in the South Hebron Hills is is one of the biggest attacks in broad daylight by settlers on a Palestinian community,” said Hagai El-Ad, the director of B'Tselem.

“But it needs to be understood that this is not just random settler violence. This is strategic. Israel aims to forcibly transfer Palestinians from large parts of the West Bank.”