As J&K Governor Dissolves Assembly, Mehbooba Mufti Appears To Be The Winner

Within 24 hours, Mufti not only stopped the exodus of her party legislators toward Sajad Lone’s third front but also halted the BJP’s march to form the government in J&K. She also got herself rehabilitated by no less than her chief political foe, Omar Abdullah. 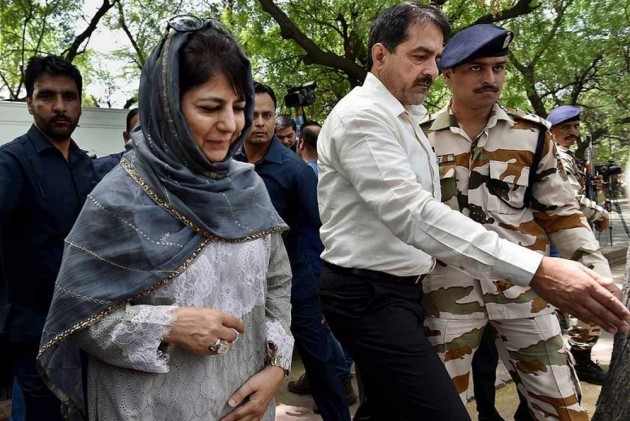 Jammu and Kashmir Governor Satya Pal Malik’s decision to dissolve the State Assembly, minutes after Mehbooba Mufti staked claim to form government, shows that Centre was unprepared about the political developments in Srinagar.

It also appears that the Governor’s decision has worked well for the Peoples Democratic Party (PDP), the National Conference (NC) and the Congress. They would now expect their legislators to remain in their parties and to focus on the Assembly polls.

The J&K Assembly had been in suspended animation since the break-up of the PDP-BJP government in June this year. The PDP had been facing an existential crisis since then.

In J&K, The Story Of A 'Broken' Fax Machine And An Elusive Governor

There Is A Fragile Security Scenario In State': Governor Satya Pal Malik On Why He Dissolved J&K Assembly

Some of its party members sided with Sajad Gani Lone’s Peoples Conference (PC) hoping he would be the new Chief Minister of a BJP-PC alliance.

The PDP’s lone Member of Parliament Muzaffar Hussain Baig on Tuesday rattled the party further by raising a banner of revolt and describing the party as in asunder. Baig’s desire to join the Peoples Conference showed that the PDP would fall apart and perish. The PDP’s future till Wednesday afternoon looked in peril.

However, within 24 hours, Mehbooba Mufti and her lieutenants not only stopped the exodus of her party legislators toward Lone’s third front, but also halted the BJP’s march to form a government in Jammu and Kashmir.

For the past few months, the BJP would hint about the formation of the government in the State and Lone was tipped to be the Chief Minister of the BJP-PC alliance. But, Mehbooba Mufti checkmated both the BJP and Lone in this political game.

At present, it appears Mehbooba Mufti has emerged as the winner. She got herself rehabilitated by no less than her chief political foe, Omar Abdullah. It would now be difficult for National Conference to speak against Mehbooba Mufti in the run-up to the polls after having supported her effort for government formation. With this move, Mehbooba Mufti has also shown her legislators that her party, which looked in tatters, is intact and kicking.

Wednesday night’s developments also showed the Centre in poor light in J&K. By dissolving the Assembly without inviting the parties for a floor test, the Governor has sent a message that electoral politics and democratic process in the State is subservient to the interests of the ruling party at the Centre. The BJP government at the Centre has proved no different from the previous Congress governments.